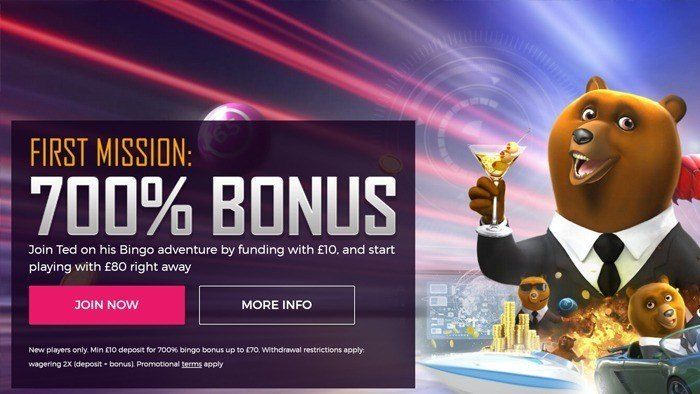 Yes, you read it right! You can get a 700% deposit bonus with the brand new bingo site Ted Bingo. This is one bingo site launch you would not want to miss. Just create an account with Ted Bingo, deposit £10 and you can get £80 which you can use to play bingo and other games on the site!

It has been an industry standard to have a 4x wagering requirement for bingo deposit bonuses. One of the new Dragonfish bingo sites released this year, Ted Bingo deviates from the usual offers coming from its peers. Your 700% welcome bonus comes with a low wagering requirement! You only have to wager 2x of the deposit amount and the bonus amount prior to withdrawal. While other sites require you to wager around £300 to £1,000, with Ted Bingo, you only have to play with £160 for you to be able to withdraw the deposit bonus (£70)! Isn’t that great? You get to make the most out of your bingo deposit bonus!

Other Promotions from Ted Bingo

Join Ted Bingo and become an “agent” or a player who goes on different missions to win big! With a site theme loosely based on the British spy movie franchise 007, this 2016 new bingo site lets you go on thrilling exploits that will bring you tonnes of cash! These “missions” come in the form of promotions that give prizes like free spins, cash back and other special awards.

Ted Bingo is also recruiting “agents” for its VIP club. By becoming a member, you will get 5-10% cashback on your gaming activities every week. That means that at the end of each week, you will get up to £500 cashback! There are also special promotions which allow you to win prizes when you reach a certain playing amount. Reach the given target and get up to 100 free spins, £50 bonus and 3,000 coins.

There are plenty of online bingo games to choose from when you sign up with Ted Bingo. For as low as 1p, you can enter some of the bingo rooms and win cash prizes. You will definitely get hyped about these games because there are some jackpot prizes that can get as high as £10,000! There are also a number of free bingo games which allow the players to win up to £500. If you are a VIP member, you get to access a wider range of free bingo games!

Ted Bingo also offers a wide selection of side games so you won’t get bored whenever you’re on the site. There are popular slot games like Fluffy Favourites, Rainbow Riches and Starburst. Other casino games are also available, including roulette, blackjack, baccarat and video poker. Ted Bingo is relatively new to the industry, but as of this writing, it has given out over £200,000 in casino winnings! There are definitely several ways to win when you become an “agent” at Ted Bingo!