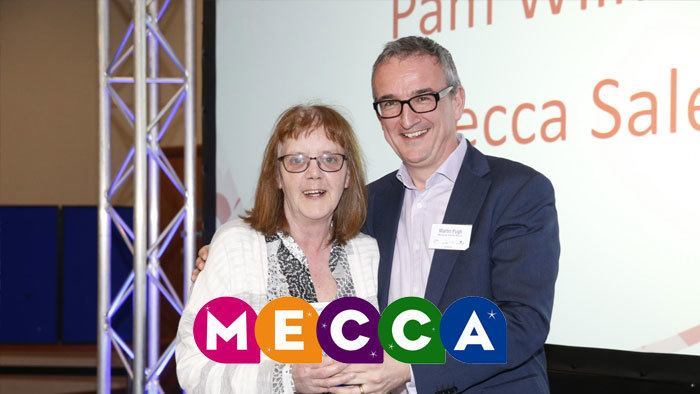 Pam Wilkins, a Mecca Sale Bingo employee has been recognised a regional charity champion for the North West. The award was given in recognition of Wilkins’ fundraising contributions to the Carers Trust.

The awards celebrated great accomplishments in funds raised for charity in the past year by Mecca teams across the UK. Mecca is a social and bingo club leisure company that offers a range of bingo games online. To check out what they offer, visit Mecca Bingo online. The Mecca teams raised an incredible £1 million in total. Wilkins was acknowledged as the Rank Cares Regional Champion for the North West of England by Mecca’s senior executives and Carers Trust.

About the Carers Trust

Those new to playing bingo online will be glad to know about Mecca’s involvement in charities. Carers Trust is a charity for, with and about carers. Carers are unpaid individuals who support others due to illnesses, disabilities and mental health problems. The goal of the charity is to improve support, services and recognition for anyone living with the challenges of helping others. The charity’s vision is of a world where the role and contribution of unpaid carers are recognised and that they have access to quality support and services they need in their own lives.

Working with partners, the Carers Trust provides access to desperately-needed breaks, education, training and employment opportunities to unpaid carers. The charity also helps carers maintain their own health and wellbeing so they do not feel isolated.

The partnership between Carers Trust and Rank Group (which owns Mecca Bingo and Grosvenor Casinos) began in February of 2014. Rank Group gave the Mecca Sale club the responsibility to host a variety of activities to raise funds.

Wilkins is the team leader at Mecca Sale. Throughout the year, she organised a whole range of fundraising events. From fancy dress events to in-club Mecca bingo promotions, she did everything she could to raise more money for Carers Trust. Wilkins managed to raise £2,500 as part of the total amount across the UK.

“It’s a great privilege and honour to be recognised and rewarded for my fundraising efforts.” Wilkins said.

“It was a complete surprise when they announced that I had won. I am completely over the moon and cannot thank my colleagues at Mecca Sale enough for helping raise a fantastic amount of money for such a deserving cause. Our customers are truly one-of-a-kind and without their support and generosity, we wouldn’t be celebrating this award.”

Cherry Tatlow – the Rank Charity Partnership Manager – expressed her gratitude to Wilkins and other members of Mecca who work to offer online bingo games for real money. She said, “It’s thanks to the hard work and passion from charity champions like Pam that the second year of our partnership with Carers Trust has been such a success.”

Keep up with the latest bingo news here at HitYah! If you need tips on how to play bingo online, then keep reading our helpful blog articles.