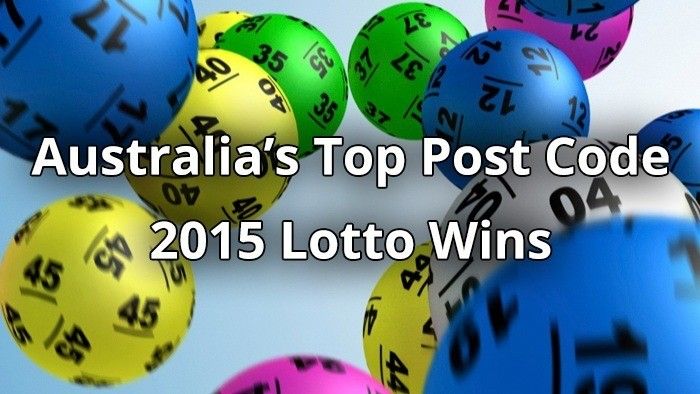 The Top Postcodes in Australia that Won Huge Lotto in 2015

There is always a lot of excitement when it comes to a lottery draw. People place their bets on numbers and wait upon announcements to see if there is a chance – no matter how slim – that they will hit the jackpot. If you believe that luck has something to do with winning, then you might be interested to know the top postcodes in Australia that produced the most number of winners last year.

In 2015, more than $1 billion was shared between 529 players who got division one winning tickets. Tatts Lotteries called the state of Victoria a ‘Hotspot’ for betting because the state had the most number of division prizewinners: a total of 144, which was more than any other area in the country.

New South Wales comes in second with 122 first division prizewinners. Between Victoria and New South Wales, the prizes incredibly amounted to $472 million. They were followed by Queensland that raked over $52 million; next is South Australia, raking in $25 million; Northern Territory has over $16 million in prizes; and then Tasmania won $1.4 million.

A Powerful Year for Powerball

Last year was a thrill for the Australian Powerball. Two lucky tickets claimed a whopping $50 million each. One of the winners even won with a $5.55 entry that she bought from a newsagent in Gungahlin. The other ticket belonged to a family from Armadale in Perth. The winners expressed that they never expected to win.

When faced with the statistics, how could they? Powerball involves drawing five white balls randomly from a pile that are numbered 1 to 69, and red ‘Powerballs’ that are numbered 1 to 26. If you’re lucky enough to match a red ball and no white balls, you’d win around $5. The chances of this happening is 1 in 38. If you happen to match three white balls, you would win around $10. This is a 1 in 580 chance. If you are even thinking that you can match four balls easily, think again. There is only a 1 in 36,525 chance of that happening. So what are the chances of getting all the numbers drawn? That’s 1 in 111.6 million chance of winning. That’s incredible! The fact that there are winners like this only go to show that you can hit the jackpot even if you never dreamed of it.

The Lucky Postcodes for 2015

After all the tickets were bought, bets were made and the money rolled in, it turned out that the luckiest postcodes in Australia for the year 2015 were:

What does this mean for all lotto enthusiasts out there? Maybe for those who believe in luck, the aforementioned places may be a great place to start buying tickets for this year. For those who don’t really believe in these things, it’s probably just great trivia to know. After all, when it boils down to chances, every ticket that you purchase has a chance to win huge. It’s completely fine to keep your own traditions that you consider lucky, such as choosing where to buy a ticket. But every number on the ticket has an equal chance of being drawn, regardless of where you bought it.

So if you’re feeling lucky, aim for the jackpot by using reputable and established lotteries. All kinds of people from all kinds of backgrounds win the lottery. Some have used the same numbers over and over again and won, while some simply made random number selections and took a chance on it. So if you want to buy tickets in ‘lucky’ places, go for it! If you want to use your lucky numbers such as anniversaries, birthdays or other significant numbers, by all means, do it. Or, if you would rather select numbers in random or even have the computer generate the numbers for you, that’s totally fine. What matters is that you choose what feels right in your gut.