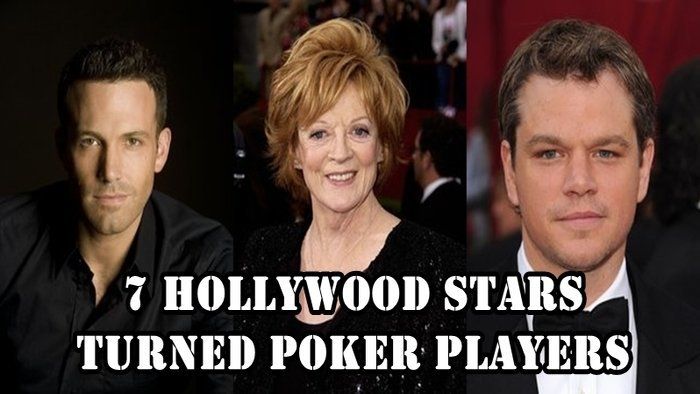 Many people think of poker as the most popular card game in the world. As such, its players are considered celebrities in their own right. But did you know that there are many TV and movie personalities who also love to play poker? You may even be surprised how some of them have raked in cash prizes at renowned tournaments.

As the years go by, more and more Hollywood stars are showing their love for poker. From playing with cast mates in between takes to cashing in chips at events, here are some celebrities who are as fierce on the poker table as they are on screen.

Luck be a lady when you play a hand against Dame Maggie Smith. Known for her roles as Professor McGonagall on Harry Potter and Dowager Countess Violet Crawley on Downtown Abbey, the 81-year old actress allegedly loves to hold poker games.

Co-star Jim Carter recently told fans that, once Downtown Abbey wraps, he was going to miss the wild poker nights with the Dame. The cast apparently plays the seven-card stud format, with Smith often coming out on top of their games.

Everyone knows that these two actors are best friends in real life. In addition to being award-winning actors, it seems that these two also let their similarities spill over to the poker table.

Both Damon and Affleck played for charity back in 2007, and have since begun popping up at various World Series of Poker events. The two actors even appeared together at the WSOP in 2012. Affleck is arguably the better player with over $300,000 winnings during his poker career, while reports suggest that Damon has only won $500.

Celebrities showing up at events aren’t the only ways Hollywood and poker coincide. Aaron Sorkin is making his directorial debut with the movie, Molly’s Game. Based on the popular memoir written by Molly Bloom, the film is about the world of underground poker in Hollywood. Incidentally enough, Affleck is among one of the many A-listers mentioned who participated in Bloom’s games.

Ray Romano has made seven appearances at the WSOP Main Event but has yet to come up with any cash. The last tournament he was in where he won any significant amount happened back in 2008. While he hasn’t made millions playing the game, Romano shows that he has a clear love for poker. He’s even raised the volume of his activities in recent years. He may not be the best poker player in the world, but you have to hand it to him for trying.

Poker isn’t just a means for Romano to have fun, he also sees it as a way to connect with family. Many parents give gifts to their kids once they reach a certain age and the comedian is no different. When his son turned 21, the actor and his wife pledged $5,000 towards a WSOP Main Event buy-in. If his son has as much interest in the game as his father does, poker tournaments will prove to be a unique bonding experience for years to come. Can you imagine if these two ended up at a table together?

James Woods is an acting icon and it seems that he’s set on making a name for himself on the poker circuit as well. The actor has been spotted on several WSOP tours and continues to play in events across the US. He’s even won nearly $40,000 in the World Poker Tournament LA Poker Classics event.

Woods is also an advocate of bringing poker to the masses. The actor was involved in Hollywood Poker, a site where regular folks can play poker with famous celebrities. While that venture didn’t last for long, there are plenty of reputable online poker sites that you can visit to enjoy the game. Who knows? You might be playing against an A-lister.

Most known for her roles on That ‘70s Show and Orange is the New Black, Laura Prepon is another celebrity poker enthusiast that you need to watch out for. She has successfully transitioned into both a player and personality through the E! Hollywood Hold'em show.

In addition to being a player and host, Prepon also has a behind the scenes role. The actress is actually working as an executive producer for the show! It makes you wonder if she’s picking anything up for her next WSOP appearance.

You can’t have a list of celebrity poker players without mentioning Jennifer Tilly. Even with her successful Hollywood career putting money into her account, the actress has turned her interest in poker as another way to cash in. She's actually considered one of best female poker players in the industry.

Tilly makes regular appearances at various poker events. She recently made an appearance in a $5,000 No Limit Hold'em Six Handed Event, where she finished in 15th and won over $25,000. Her personal best was back in 2005 when she won over $150,000 at the WSOP Ladies’ Only Event. Tilly actually came in 1st for that event at the 36th WSOP in Las Vegas.

Tilly is one celebrity who manages to balance both her Hollywood and poker careers. She continues to join major poker tournaments all over the world and takes on whatever acting projects may come her way.

There are several other celebrities who love playing poker. Some of them play for fun and there are those who play for money… or some transition from just playing for fun and later on playing for money. It’s often the case for online poker players.

If you’re a fan of poker and interested in playing online, you can check out some of the best online poker reviews at our HitYah website to help you find an operator that fits your liking. Look around and you’ll find exciting offers such as free poker bonus codes and no deposit bonuses! For example, you can signup with WSOP and earn a 100% deposit bonus. Start playing now!