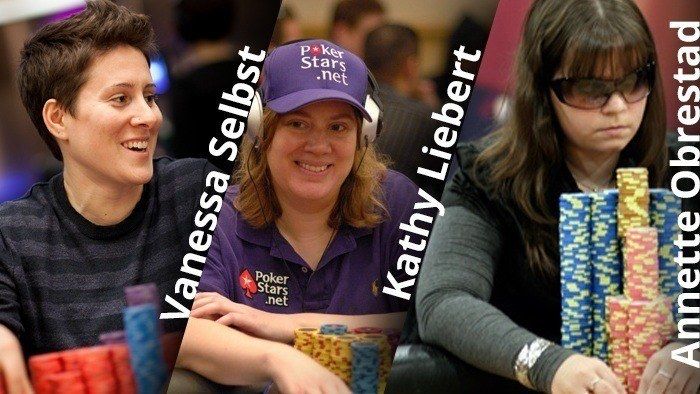 Like many other things, poker is a male-dominated field. Ladies-only tournaments may be going on, but that doesn’t mean women can’t hold their own among their counterparts. 1978 saw Barbara Freer become the first female to buy in to the World Series of Poker No Limit Hold‘Em main event. 1986 had Wendeen Eolis making history by being the first female to cash in. While the numbers in the field are still in favor of males, more and more women are rising up in the ranks that repeatedly prove that they can never be counted out. Not only can ladies play, they can win big.

When it comes to a poker domination, no one does it better than Vanessa Selbst. Her name is practically synonymous to the game itself, with most considering her to be the best female player. The American poker pro has earned a total of USD 10,614,397 from live tournaments, including a World Series of Poker event with a prize of USD 871,148. Selbst has a total of 3 WSOP bracelets, and is no doubt on her way to win more events and championships in 2016.

Poker enthusiasts should know this next lady, as Kathy Liebert has been part of the circuit for over twenty years. While she only holds one WSOP bracelet, the player has won numerous first, second, and third finishes, as well as joined several final tables. To date, Liebert has won a total of USD 6,038,551 from live tournaments.

Born in Norway, Annette Obrestad is the youngest poker player to ever win a WSOP bracelet at the ripe age of 19. Despite her youth, she was able to beat some of the strongest poker pros at the 2007 WSOP World Championship No Limit Hold ‘Em event for a cool USD 2,013,733.

Here’s another Vanessa that’s considered by most as a house hold name in poker. Rousso has been a top player for a decade, earning places at several high-profile final tables. Along with USD 3.53 million live tournament earnings, she has also won a million in online events.

Born Hui Chen-Kuo, this Taiwanese pro has been in the tournament circuit since 2010, winning events in Macau and Las Vegas among other tournament stops. Despite having considerably less experience than some other names on this list, Kuo is placed second in the Global Poker Index world ladies rankings, indicating that she is a force to be reckoned with.

With the recently concluded Aussie Millions tournament, Samantha Abernathy has become one of the most talked about players in the poker world. Along with Kuo, the American made it to the main event and finished third behind second-place finisher Tony Dunst and tournament champion Ari Engel. Currently, Abernathy also holds fourth place in the Card Player Player of the Year rankings.

Jennifer Tilly is one woman who should never be left out of any list involving female poker players. Critics may have scoffed when the actress joined the Ladies’ No-Limit Texas Hold ‘Em event at the 2005 World Series of Poker, but they were certainly at a loss when Tilly not only played well, she also defeated 600 players to become a champion. While luck does have a role to play in poker, Tilly proves that it’s not all there is with her record of 12 money finishes at the WSOP and 11 on the World Poker Tour. As she continues to build her poker career, many fans are also considering her a contender for halls of fame.

This poker player has been posting impressive scores in recent years. She’s made a name for herself in 2011 after finishing 3rd at the European Poker Tour San Remo, and followed it up a year later with a fourth-place finish at the PokerStars Caribbean Adventure Main Event. Liu has also appeared in final tables at renowned tournaments such as Aussie Millions and Asia Pacific Poker Tour Seoul. Having earned USD 1.6 million from various tournaments, Liu is one rising star who’s well in the position to win a major title.

Affectionately known as E-Tay, this player has been part of the poker circuit for nearly ten years, giving her what it takes to be successful in live tournaments as proven with how she’s made several final tables since 2008. While she was focused on being a mother for the better part of 2015, E-Tay’s still competed in a number of tournaments, and it shouldn’t be a surprise that she’ll continue to make her presence known in 2016.

2012 saw Loni Harwood not only take live poker events seriously, but also saw the beginning of a lucrative career. In a relatively short time, Harwood has already earned USD 1.6 million in winnings, along with a WSOP bracelet. 2015 saw her winning at the Big Stax Championship and at the WSOP National Championship, making many poker fans excited for how she’ll do this year.

With more and more women showing their interest in the game, naming just ten players is no easy feat. Names like Liv Boeree, Jessica Dawley, and Maria Ho are likely to show up in various events. New comers such as Kelly Minkin and Cate Hall should definitely be on people’s radars. Veterans such as Annie Duke, JJ Liu, and Victoria Coren Mitchell can make returns to the spotlight. If the past years and even most recent events are anything to go by, female players are going to make plenty of waves in the poker scene throughout 2016.