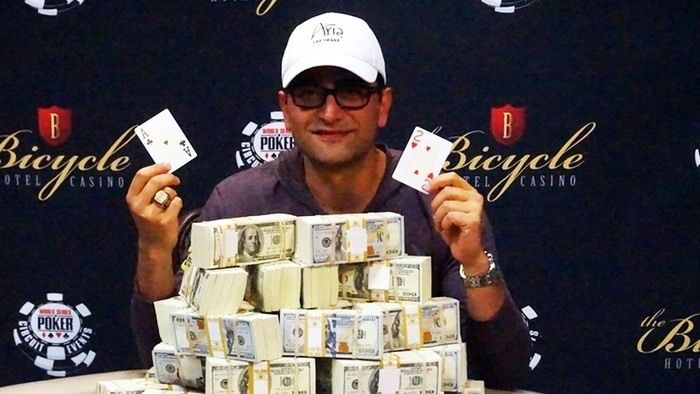 Antonio Esfandiari – one of poker’s brightest stars of today – won his first World Series of Poker Circuit (WSOPC) gold ring after dominating the final able at the Bicycle Casino in Los Angeles.

A Spectacular Show at the Bicycle

Esfandiari is known as “The Magician” in the poker world. This man moved up to higher poker stakes and outlasted a field of 756 entries in the WSOPC no-limit hold’em main event. Esfandiari came into the final day of the live tournament in the middle of 12 remaining poker players. There was plenty of competition to deal with, including Ray Henson, Barry Wood, Bruce Buffer, Bryn Kenney and the recent Card Player Poker Tour (CPPT) main event champion Ludovic Geilich. In the end, it came down to a head to head face off with Jamie Gold. Esfandiari secured the pot and the title with a full house and a stranglehold on the hand.

This WSOPC win is Esfandiari’s first live tournament title winning since winning his third WSOP bracelet in 2012. His US$226,785 prize is his most significant tournament score since coming in fourth in the US$100,000 Super High Roller in 2014.

This win comes as a great comeback for Esfandiari. Back in January, The Magician was disqualified for the PokerStars Caribbean Adventure (PCA) main event when he broke poker rules and displayed inappropriate behavior at the table. This disqualification was due to the act of Esfandiari urinating in a bottle while at the table because his legs were too sore for him to make it to the toilet.

Esfandiari was very apologetic about the entire situation. He said, “I made a mistake. My actions were totally out of line and unacceptable... I wish I could go back and do things differently. My behavior was a bit childish and I apologize. I am not proud of the way I behaved today.”

Now, The Magician is has increased his poker net worth and his track record more impressive than before. He won 912 Poker of the Year (POY) points for winning first place. Check out the payouts and POY points awarded at the WSOPC final table:

For a line-up of the upcoming tournaments and events, just head over to one of our earlier blogs and check out the 2016 complete poker events calendar here on HitYah!