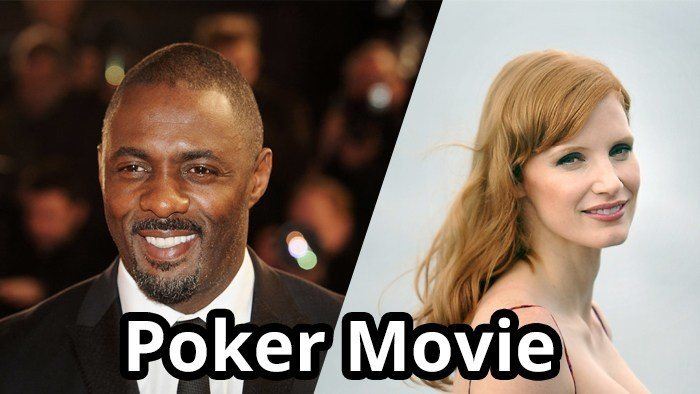 Jessica Chastain and Idris Alba to Star in Poker Movie

There’s a new update for poker in movies as it has been announced that English actor Idris Elba will join Jessica Chastain in Aaron Sorkin’s film adaptation of the non-fiction book Molly’s Game: from Hollywood’s Elite to Wall Street’s Billionaire Boys Club, My High-Stakes Adventure in the World of Underground Poker. From playing online poker, to poker games friends or watching poker pros and even poker games for charity, the appeal of poker covers a wide field of varied levels and types of players.

If you want to discover the top Hollywood celebrities who play poker, this is the movie you should watch out for. The film is about the true story of a former athlete who turned into a poker organiser whose illegal high-stakes games attracted big names in Hollywood, including Leonardo DiCaprio, Ben Affleck, Matt Damon and Tobey Maguire.

So far, Chastain has been cast to play Molly Bloom who was dubbed as the “poker princess” for spending eight years organising exclusive poker games for high-end clientele. On the other hand, Elba is set to play Bloom’s criminal defence lawyer who learns that there is so much more to the poker madam than what tabloid newspaper reports have led the people to believe.

Chastain has earned Oscar nominations for her roles in the movies The Help and Zero Dark Thirty. Elba is best known for playing Nelson Mandela in the biopic Mandela: Long Walk to Freedom. He also received BAFTA and Golden Globe nominations for his role in the 2015 movie Beasts of No Nation.

Sorkin appeared to be delighted with the chosen cast for his directorial debut. He told Variety, “The casting of Jessica and Idris in the two lead roles is any filmmaker’s dream come true. They’re two of the greatest actors of their generation, paired for the first time, and their chemistry will be electric.”

Meanwhile, Sony Pictures Entertainment does not seem to agree with Sorkin’s vision of success for the film. It has been reported that the company has pulled out from the movie production. However, former Sony executive Amy Pascal will still work as the movie’s producer alongside Mark Gordon. The executive producer role has been passed on to Leopoldo Gout. Reports have mentioned that the movie will not be widely released and it will only be marketed at Cannes.

When she was 21, Bloom already ranked third in North America for skiing. After failing to qualify for the Olympics, she moved to Los Angeles and worked as a cocktail waiter. She then found her way into the social circuit and organised underground poker games at popular Sunset Strip nightclub The Viper Room. She definitely knew that she could earn more money in higher stakes of poker because she started demanding a share of the pot rather than just earning tips. This went on until the FBI discovered the underground operations and shut down the games. In the book, Bloom shared what kind of players Affleck, DiCaprio and Damon were and spoke nicely about them. However, what made her memoir interesting was how she described Tobey Maguire as a poor tipper and a moody player with a weird fetish.