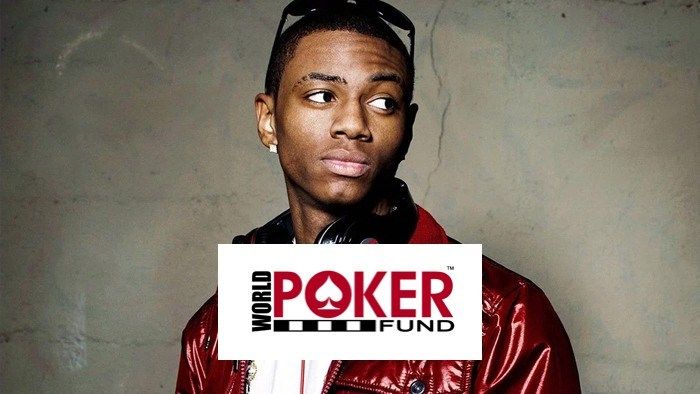 On May 1st, the famous artist Soulja Boy posted on his Twitter account that he had a huge deal coming up. A few weeks later, that deal turned out to be one with the World Poker Fund Holdings (WPFH). The WPFH has  issued a statement that Soulja Boy will be paid a jaw dropping US$400 million to endorse its online poker sites and event-based social gaming platforms, such as CelebrityWorld.com and InSkyCasino.com.

The WPFH stated that previous partnerships with Puff Daddy and Ciroc vodka, as well as with 50 Cent and Vitamin Water, show that joining forces with an influential music artist like Soulja Boy will be successful.

The statement says: “Soulja Boy is arguably the world’s youngest music mogul to complete a deal of this magnitude. At 25, he is one of most influential urban entertainers and artist on social media today, boasting a social media following of over 15 million.

“Soulja Boy will mobilize his network to promote World Poker Fund’s online gaming assets such as CelebrityWorld.com and its soon-to-launch 'in-flight gaming' platform which aims to service the 3 billion plus global travelers across multiple airlines worldwide.”

A Deal Too Good to be True

Soulja Boy has expressed his excitement about building his brand with World Poker Fund. He says, “I invest in things I understand. I enjoy music, and of course gaming. Being an influencer is a form of currency. Having portfolio diversification is critical if you want to be an effective brand ambassador. With regards to World Poker Fund, I believe in its strategy, its team, the vision, and management’s ability to target its financial goals.”

Matthew Bird – the President of 1-800-PublicRelations and spokesperson for WPFH – was quoted in the statement, saying “The world of marketing is changing, today’s biggest influencers are not brands, but individuals who create content that drive loyalty and brand sentiment. We no longer are fed content from major news networks — we seek it out and consume it by individual influencers that enrich our lifestyles. Soulja Boy represents the best of the best and we are already seeing the impact from his presence.”

Do You Believe It?

It seems that the 400 million tag price on the partnership has some wondering how the deal is even possible. How does a company that is worth around $50 million going to pay out $400 million to their celebrity endorser?

In addition, it seems that Soulja Boy is a curious choice for a deal like this. According to Forbes, Cristiano Ronaldo was the highest paid athlete in the entire world in 2015. Ronaldo has an estimated annual profit of US$79.6 million, with around US$27 million coming from endorsement deals – only one of which is with PokerStars. You can check out PokerStars online to see Ronaldo’s Team PokerStars profile.

So what do we make of Soulja Boy’s deal?

The most plausible answer is that it is not a one-time transaction. In a separate Forbes article, Bird is quoted saying “[Soulja Boy] really kind of jumped the gun” by using the US$400 million figure. So the deal, according to Bird, includes both stock and revenue-sharing.

Bird continues, “The deal is capped at $400 million, and it’s based on a forward-thinking valuation of the company. He’s young, he’s 25 years old. He got really excited, and he tweeted something he probably shouldn’t have tweeted. He was getting a lot of pressure from within the entertainment community, so he wanted to put a statement out. Obviously, the company’s market cap is at US$51.8 million. There’s no way they could cut a US$400 million deal. Endorsement deals are calculated on a lot of different factors. This is not a fully cash transaction.”

With this deal sealed in writing, we can only wait and see if WPFH made the right choice with the rap star. Check out more online poker news here on hityah.com.