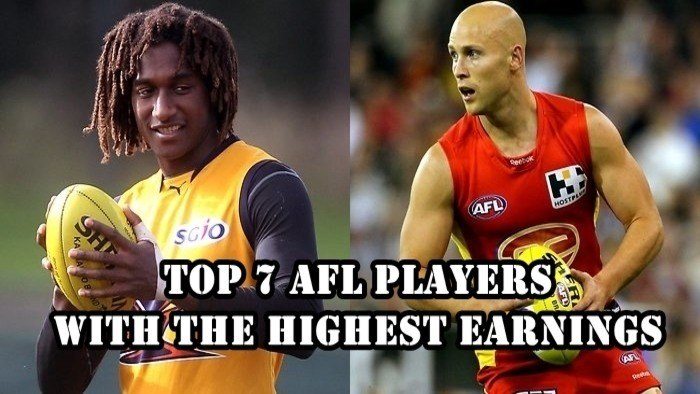 The Australian Football League recently released the list of players with the highest paychecks. Out of the 7 athletes on the 2015 Total Player Payment list, industry experts say that at least 4 earned over a $1 million. Imagine how it's going to look if you create your fantasy AFL team with these footy stars.

Check out the following 7 footballers who are said to be the league’s highest paid. With the start of the 2016 season, it’ll be interesting to see if these 7 players prove to be worth the higher paychecks. What’s more is if this list will have any effect on AFL sports betting and team odds.

Following in the footsteps of his father Gary, Sr., Ablett is arguably one of the best players to have ever stood on the pitch. He was recruited by The Suns as a foundation for their startup franchise. The midfielder has done remarkably well with the club, earning his second Brownlow Medal in 2013.

According to the AFL website, Ablett is one of the million-dollar earners, banking over $1.2 million in 2015.

Considered the model of a modern-age midfielder with his tall and strong physique, Fyfe oozes more than enough skills to warrant a million dollars. If he’s not earning that much yet, it won’t be too long until he does.

Collingwood’s classy captain and undisputed best player also makes it on the list. Another midfielder, he’s yet to capture a Brownlow award, but it should be no surprise to any fan when he manages to clinch it soon.

Naitanui’s unique rucking style makes him one of the most exciting players to watch. Did we mention that he’s only 25 years old? Given his age, it’s certain that he’s yet to reach his peak, giving industry experts and fans alike more reason to pay attention.

If that’s not enough to pique your interest, the AFL also notes him as another million-dollar earner.

Some may be surprised by Watson’s appearance on this list. The Bombers’ captain will be sitting out the 2016 season due to a drug suspension. He may even have his 2012 Brownlow Medal stripped because of it. However, Watson is still considered to be one of the league’s all-time best midfielders and as such is paid well above average.

Murphy is perhaps one of the most criticised captains in the league but his talents as a gun midfielder are undeniable. It’s his game that the club primarily pays him for after all.

The 2016 season will once again put his leadership skills to the test as Carlton is pegged to struggle this year.

Brisbane may have lucked out on landing Dayne Beams last year when the player decided to move from Collingwood so he can be closer to his family. However, The Lions still needed a good amount of money to lure him over. With injuries plaguing the athlete last year, the Brisbane club can only hope that 2016 fares better for Beams.

Other than Ablett and Naitanui, 2 other players are said to have earned over a million in the past year. This is a fairly remarkable number as the average salary across the entire AFL is at $300,000.

If you’re planning to place your bets, visit HitYah for some of the best sports betting websites online. Signup with one of the reputable operators and you can enjoy new bookmaker bonus promotions such as betting bonuses from Sportsbet  as well as all our bookmaker deposit bonuses!