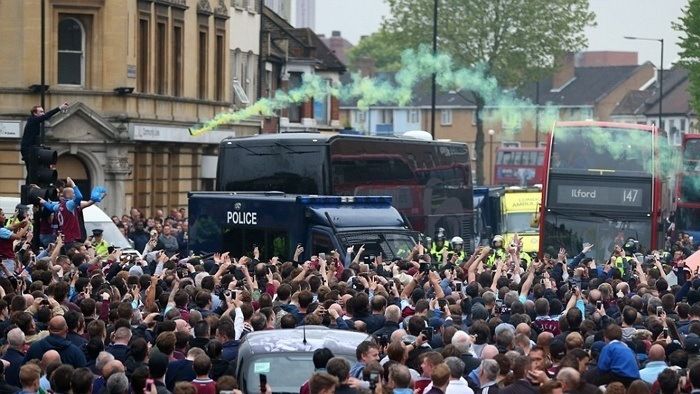 A poor image of English Premier League football is being broadcast all the over world today.

Tuesday's match between home team West Ham United and visitors Manchester United marked the final game at Upton Park, also known as Boleyn Ground. A momentous occasion, celebrating 112 years of games at the venue before the move to the Olympic Stadium in Stratford. West Ham football team fans, including celebrity Russell Brand, gathered at the stadium for the last time, to barrack for their team, capture final photos and honour the great teams and soccer legends who had played there over the history of the stadium.

A thrilling 3-2 victory topped off the night for West Ham, one that might have just ended the chances of Manchester United entering the Champions League.

But the memory of that final match has been marred by the hooligan behaviour of some fans. West Ham fans pelted the Man United team bus with flying cans and bottles and other missiles as it approached the stadium. Around nine windows were smashed and other damage done as fans swarmed around the bus and began their assault, blocking its path to the stadium.

Photos in the media reveal Man United team members crouching on the floor of the bus in order to avoid any flying glass from the shattering windows, and onlookers running for cover. Riot police stationed themselves around the coach in an attempt to prevent further damage. Mounted police and smoke bombs also were utilised in order to help control the situation. The attack lead to the game being further delayed.

West Ham United issued a statement saying they will work with police to help identify those who took part in the attack on Tuesday, and have committed to issuing any culprits with life bans. They also stated "It was an extraordinary night full of extraordinary moments in front of extraordinary fans. 99 per cent of whom behaved impeccably and were a credit to the Club."

Manchester United captain, Wayne Rooney, said: "It wasn't nice, obviously the coach was smashed up. I'm sure you'll see the images so it's not for me to say, but obviously it was disappointing. It's a big night with West Ham leaving the stadium but I'm sure they'll be disappointed with what the fans have done."

It's a shame that such behaviour detracts from the great soccer West Ham played on the night. It was a highly charged night, with emotions running high. At one point it looked like the party at the end of the night might not be happy one. Then late goals from Michail Antonio and Winston Reid bagged a win. Fans broke out in song, and the strains of the West Ham anthem "I'm forever blowing bubbles" filled the arena. A fine finish and final bow for West Ham at Upton Park.