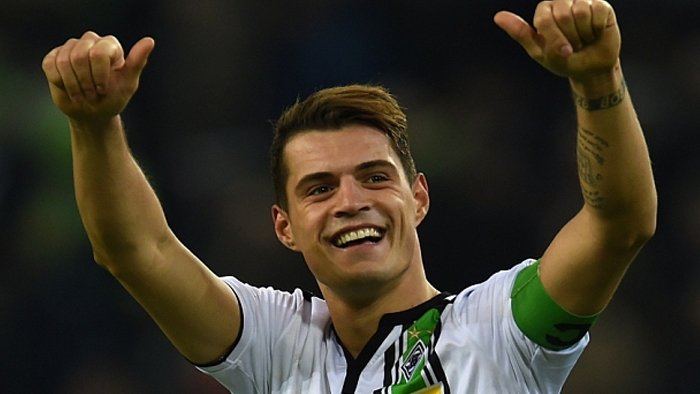 English Premier League side Arsenal are set to sign Swiss international midfielder Granit Xhaka. The midfielder has been plying his trade with German Bundesliga team Borussia Monchengladbach since 2012, and has been highly regarded by the top teams in Europe.

Arsenal had reported scouted Xhaka around 30 times this seasons and Arsene Wenger will spend around £30 million for the ‘Gladbach captain. Xhaka has already agreed personal terms and begun his medical with the London club. Xhaka was apparently granted permission to complete the deal ahead of Switzerland’s Euro 2016 campaign.

Who is Granit Xhaka?

Xhaka helped lead Monchengladbach to a fourth place finish in the Bundesliga this season and qualification to the Champions League qualifying round. The club had got off to a torrid start to open the season which saw the Foals lose their first five fixtures before turning it around.

Typically deployed as a deep laying midfielder, capable of making darting runs into the oppositions’ 18-yard box, Xhaka posted brilliant numbers for ‘Gladbach during the season. Although his goal scoring and assists statistics are typically low, it is his defensive capabilities and ability to read a game that make him sought after.

In 28 matches in the Bundesliga, Xhaka averaged 2.7 interceptions and 2.4 tackles per game. In terms of tackles, Xhaka ranks side by side with new Arsenal teammates Francis Coquelin (2.8) and Aaron Ramsey (2.5). Meanwhile, Xhaka’s 2.7 interceptions puts him just behind Coquelin. Xhaka only scored three times during the season, yet his game is more creative and control than finisher.

Xhaka is only 23-years old and came through FC Basel’s academy in Switzerland. Stoke City’s Xherdan Shaqiri also came through at the same time before going onto prominence at Bayern Munich. Xhaka was originally a target of both Bayern Munich and Liverpool, and his signing by Arsenal can be seen as coup for the Gunners.

The deal looks set to be completed in the coming days, with Xhaka already being pictured in an Arsenal shirt. Xhaka does not have a buy-out clause in his ‘Gladbach contract at the moment, although a £22m clause will be triggered following the 2016-17 season. ‘Gladbach would need to sell their star midfielder this summer to maximise any potential profits on the Swiss international.

The Foals sold German star Marco Reus for £12.8m to Borussia Dortmund in 2012. Once finalised, Xhaka will become the club’s most expensive sale to date.

How he Fit in at Arsenal?

Arsenal finished second in the English Premier League this season, ten points off of top spot. Xhaka will be a creative addition, someone that can play deep in the midfield that can dictate the game in attack or defence. With Jack Wilshere regularly out through injury, Xhaka is a proven player that can stay healthy. In four seasons with ‘Gladbach, Xhaka missed nine matches, with only four being through injury. The others were all down to illness. In fact, Xhaka did not miss a match in 2015-16 due to injury. Deployed next to the likes of Ramsey and Coquelin, Xhaka should excel at the Emirates.

Last summer the English Premier League spent over £150m on players from the Bundesliga, with Xhaka’s move to Arsenal, that figure could topped this summer as transfer season begins.