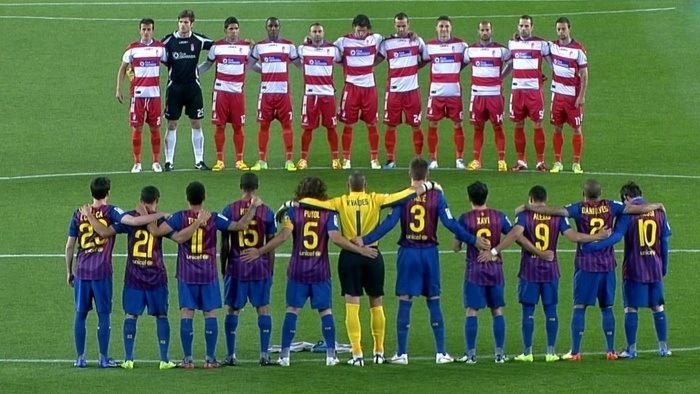 Barcelona One Win Away From 24th La Liga Title

Barcelona must win away to Granada on Saturday evening to assure themselves of back-to-back La Liga titles. The Blaugrana are the masters of their own destiny and must avoid dropping points away from Camp Nou. Only one point currently separates Barcelona and Real Madrid and any slip up will allow the capital side the chance to take top prize.

Down to the wire

Los Blancos can usurp Barcelona with a win and a Blaugrana loss or draw. Anything less and Madrid will finish the domestic season empty handed. Madrid is currently top in Spain’s form table with 18 points from their last six games.

In Los Blancos previous meeting with this weekend’s opponents Deportivo, Madrid thrashed the Branquiazuis 5-0. Karim Benzema was on target for two goals in that first meeting, while Gareth Bale added a hat-trick. Deportivo have only won once in their last six fixtures and sit safely in mid-table. With only pride to play for, Madrid will smell blood on Saturday.

Meanwhile, Barcelona will kick-off in Granada simultaneously (17:00 CET). All the pressure is on Luis Enrique’s men. Only a win on Saturday guarantees Barcelona of the title.

In Barcelona’s last four fixtures, the Catalan team have outscored their opponents 21-0. In the reverse fixture against Granada, Barcelona decisively beat them 4-0, as Lionel Messi tallied three goals inside 60 minutes before Neymar capped off the scoring in the 83rd minute. Granada are coming off a high, beating Sevilla 4-1 in their last fixture, and have won three of their last four. An upset could be on the cards.

No Bale or Vazquez

Madrid do have injury issues ahead of the final weekend of play. Goalkeeper Keylor Navas and right-back Dani Carvajal both returned to training in mid-week. However, Bale and Lucas Vazquez have not participated in training. There is no word yet, if either man will be fit enough to feature on Saturday.

Bet365 is offering Barcelona to beat Granada at 1/10. Granada have been given little chance to defeat the superpowers of Messi, Suarez and Neymar in the final fixture of the season, and are 20/1 to win the match. A good price for an upset. Madrid comes in at 1/6 for Saturday’s fixture with Deportivo, who sit at 11/1.

Going on form, it is hard to see anything different than both Barcelona and Madrid winning, with Barcelona lifting the La Liga trophy. Looking at score lines, Mardid are 16/1 to duplicate the 5-0 thrashing they put on Deportivo last January. Meanwhile, Barcelona are 8/1 to repeat their 4-0 score line against Granada.

With everything still to play for on Saturday, both teams must win. However, Madrid desperately need help in Granada if they are to celebrate their 33 La Liga crown.