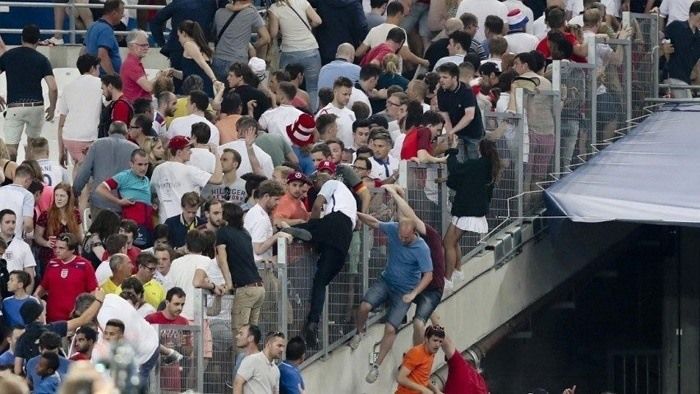 England and Russia Could be Banned from UEFA Euros 2016

England and Russia could be banned from the UEFA Euros 2016 tournament after violent outbreaks before, during and after the teams’ match on Saturday night.

The two countries met in a group B match at Marseille’s Stade Velodrome, drawing 1-1 to kick-off their Euro 2016 campaigns. The clash between England and Russia fans have left numerous English supporters injured and some hospitalised and in critical condition.

UEFA has announced that it has begun disciplinary proceedings against Russia for the attack on English supporters. UEFA stated the charges against Russia are for crowd disturbances, racist behaviour, and setting off fireworks.

UEFA has said that it will impose sanctions on both countries should there be any further trouble with fans. The governing body of European football said it would not think twice about disqualifying both countries on the basis of crowd trouble.

English spectators there to barrack for England's side said after the incidents that the Russian fans had come “fully prepared” and organised for a battle. With one fan informing the BBC that some Russians were “wearing mouth guards and MMA style gloves”.

The Russian fans had even sneaked fireworks and flares into their supporters’ end, igniting them during the second half of the match. The sound of fireworks could be distinctly heard in the TV presentation of the match.

“One Englishman is still in hospital hovering between life and death,” a police spokesman said. “He is in a critical condition after his heart stopped before revival.”

"I've not seen scenes like that in a football stadium for decades," Martin Glenn, FA chief executive, declared. "We were worried, because we knew for a while that England fans had been able to get tickets from the Russian website, but the segregation in the ground clearly wasn't strong enough to stop the terrible scenes that we witnessed.

"So it was very upsetting, it must have been really, really, scary for the people involved."

With Russia due to host the 2018 World Cup, the country is now under even more scrutiny than it was before. UEFA is expected to make a disciplinary decision on the Russian team ahead of their next match against Slovakia.

England supporters have been at the centre of conflict since arriving in Marseille ahead of the team’s Saturday night fixture. Fans fought French riot police in pitched street battles making many recall the 1980s hooligan problems.

Russia has had previous incidents with unruly behaviour at the European Championships. At the 2012 edition of the tournament in Poland and Ukraine, Russian supporters caused various problems around the stadiums at all three group games. UEFA’s gave the country a slap on the wrist as a result £150,000 and Russia were deducted six points ahead of their Euro 2016 qualifying campaign. That, however, was reduced on appeal.

Keep Up-To-Date with All the Latest Euro 2016 Teams

With all that's happening at this year's Euro 2016 - the good, the great, and the shameful - make sure you keep on top of it all via our Euro 2016 pages. Here you'll find not just all the teams and their statistics, but a solid range of odds comparisons, too. As well as finding the best odds, top sportsbooks are also offering great deals for this spectacular tournament. Make sure you take full advantage of what's on offer.

Despite the intense security around the stadiums, in response to the November 2015 Paris attacks, safekeeping wasn’t as intense inside the ground. According to fans, the supporters were not properly segregated, which led to supporters clashing in the stands. Commentators have expressed their surprise about the lack of policing they have seen at the competition. Thoughts of a lack in police presence is quite worrying following the terrorist attacks late last year.