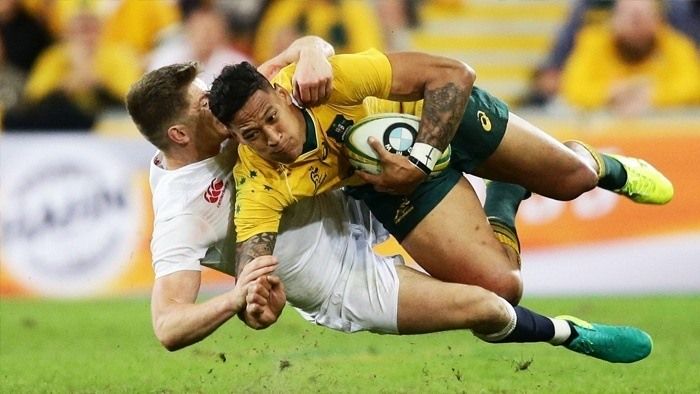 England defeated Australia 39-28 in a night of firsts. It was the English’s first win against the Wallabies in Brisbane and England secured their highest points total against the Australian Rugby Union team. The win over Australia stood in stark contrast to the 2015 Rugby World Cup, when Australia humiliated the English 33-13.

England and Australia are currently in the mists of a three-match test series. The second match will take place on 18 June in Melbourne and the final match takes place on 25 June in Sydney.

Australia started well, taking the game to England with plenty of pace. However, England contained them, keeping Australia from getting away. Michael Hooper put the Australians ahead in the ninth minute with the game’s first try. Israel Folau added a second seven minutes later, and it looked likely that the Wallabies would punish England just like at the World Cup. Despite scoring two tries, Bernard Foley could not make the conversion, leaving the door open for the English.

England began their fightback from there. Owen Farrell scored six of seven penalties during the match, tallying his first in the 20th minute. Jonathan Joseph scored England’s first try in the 32nd minute with Farrell converting the try. Farrell then scored three more penalties before halftime to put England up 19-10 at the break.

After halftime England were on fire, Marland Yarde scored a try in the 45th minute with Farrell again converting. Penalties in the 56th and 66th minutes from Farrell put the game away, but Australia teased a comeback. Tevita Kuridrani scored in the 70th minute with Foley finally converting a try. Foley was successfully with penalty minutes later, giving fans hope. However, substitute Jack Nowell put the game on ice for the English with a 79th minute try.

The biggest difference between the two sides, came down to the kicking game. Foley scored two out of two penalties, but only one of four conversions. England on the other hand, were a perfect three for three on conversions and six for seven in penalties.

The two foes will play again on the 18th in Melbourne at AAMI Park. England can win the three-match test series with a victory in Melbourne. Odds following the first test have England to win match two at 1.33. Meanwhile. Australia 2.85 to win. Make sure to take advantage of any sign-up offers from some of best online sportsbooks when you wager on this game.

What they Said After the First 2016 Rugby Test

England captain Dylan Hartley was elated with the team’s performance: