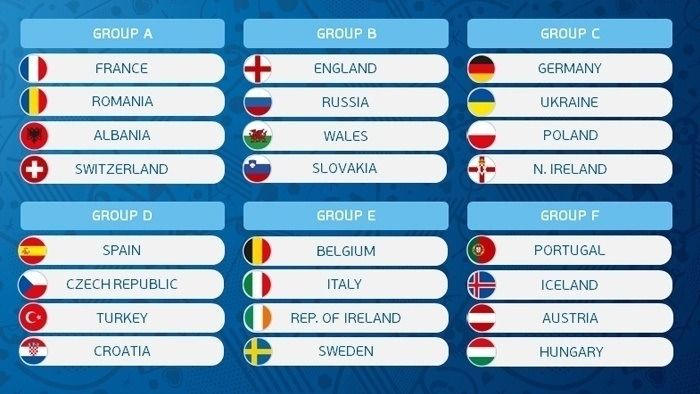 Euro 2016 Group E is a proverbial group of death, at least on paper, as Belgium, Italy, Republic of Ireland and Sweden compete for the chance to move on to the next round in the 2016 Euro matches. Belgium are currently enjoying a golden generation of players, but will they be able to make good in this year’s European Championship? Italy are not the team they were at the last European tournament, when the Azzurri finished as runners-up to Spain. Ireland and Sweden will be handfuls in their own right, with experienced players in international competition. Group E kicks off on June 13th.

Are ready to place your wagers on UEFA Euro 2016? Head to our Euro 2016 odds comparisons pages, select the match to view the soccer odds from a wide range of the best sportsbooks, and then click to place your wagers online. One great advantage of trying somewhere new are all the sign-up bonuses on offer, where you can easily double or triple your bet without laying out any extra cash.

Belgium topped their qualifying group collecting 23 points from 30. The Belgians’ defence was miserly, giving up only five goals along the way. In the meantime, the attack was brilliant, scoring 24 times. Kevin De Bruyne and Eden Hazard scored five goals each, and Marouane Fellaini added three of his own. The biggest plus for Belgium is the fact they can call on a plethora of top-quality players in attack. Romelu Lukaku, Dries Mertens and Christian Benteke can all slot in when needed. The Belgian team is reminiscent to the Spanish sides that won the last two tournaments in terms of depth. The depth at each position and quality, will make Belgium extremely difficult to beat.

Belgium’s Radja Nainggolan is a superstar in the making. A hardworking, box-to-box midfielder that is as comfortable getting stuck in as he his hitting a long range shot, Nainggolan is the perfect foil to any team’s No. 10. Italy will be familiar with the Roma star, but that doesn’t mean he will dictate the midfield against the Azzurri. Nainggolan won’t be needed to score in this Belgian side. Rather, Nainggolan will be the player that starts the attack from midfield. The midfielder is thought to be on the move to Chelsea this summer, and a big tournament performance could sway the London side to part with serious cash for him.

Belgium are everyone’s dark horse due to the potential in the team. However, manager Marc Wilmots has to get consistency from his attack-heavy side. Belgium can go all the way, and with the addition of more teams, that could help their route to the finals. With this squad, Belgium should at least make it to the semi-finals. Current odds to win tournament: 12.00

Italy had little trouble qualifying for the tournament in France, topping their group with 24 points. Of the teams to finish top of their qualifying groups, only Portugal scored fewer goals than Italy (16). Yet, the Azzurri still went undefeated in a lacklustre campaign. Graziano Pelle led Italy in scoring with a mere three goals. Italy’s five strikers in the squad are unproven at the international level, and are a far cry from the striker Mario Balotelli was at the last edition of the Euros.

Stephan El Shaarawy has re-emerged as one of the top players in Serie A. After injuries and poor form derailed his AC Milan career, the Italian was unimpressive in a six month loan to Monaco. However, January’s move to Roma has re-invigorated the winger. Eight goals and two assists in 16 matches helped Roma qualify for the Champions League. Still only 23, this could be El Shaarawy’s break out tournament, and show everyone he is here to stay.

Italy may have gone undefeated in the qualifying stages, but there is nothing interesting about Antonio Conte’s team. The manager will be off after the Euros and Torino coach Giampiero Ventura will take over. A lacklustre signing and one that will continue the current progression, or digression, Italy are on.

Italy’s attack is unimpressive. Ciro Immobile has scored once in 13 international fixtures. Most of Italy’s hopes will lay on the shoulders of Pelle. His five goals in 13 internationals is respectable. But can he do it at the Euro 2016 tournament? Italy should get out of the group. Anything else should be seen as a positive. Current odds to win tournament: 19.00

Ireland had to go through the playoffs to get into the tournament. In the two-legged knockout tie, Ireland defeated Bosnia and Herzegovina 3-1 on aggregate. Ireland's build-up to the tournament hasn’t been great. Despite a win over Switzerland in March, the Irish drew with Slovakia and the Netherlands before losing to Belarus in their most recent friendly.

At 35, Robbie Keane is still going strong for Ireland. Keane is in his fifth full season in Major League Soccer with LA Galaxy, where he has become one of the best strikers to ever grace the league. Football fans may not realise he has been there since the summer of 2011, but he has; scoring bucket loads of goals. The Galaxy are in the middle of the MLS season and Keane has scored four times in six games. He is in form and Ireland will need him at the top of his game to get out of the group.

Expectations are low for Ireland at this year’s Euros, and Martin O’Neill’s squad hasn’t looked very good as the tournament approaches. Captain Keane is fit after a calf injury scare. Will he get the service he needs to score? The midfield looks weak and will be overpowered by Belgium and Italy. A fight for third may be Ireland’s best bet at progression. Current odds to win tournament: 151.00

Zlatan Ibrahimovic carried Sweden through qualifying by scoring more than half their 15 goals. Like Ireland, Sweden had to go through the playoffs, beating Denmark 4-3 on aggregate. Even then, Ibrahimovic had to carry the team, scoring three in the playoff. Where would they be without the great Swede?

In their current state, Sweden are nothing without Ibrahimovic. The big striker is in the form of his life. He scored 38 goals in France’s Ligue 1 as Paris Saint-Germain wrapped up the title in March. Sweden will need Ibrahimovic to carry over his form if they have hope of doing anything in the tournament.

Third place is possible, and depending on Ibrahimovic’s form, Sweden could take down Italy. If things go right, Sweden could finish in second place. However, top of the group is well out of reach. In the knockout round it’s anyone’s guess what Sweden can do. It all depends on Ibrahimovic. Current odds to win tournament: 101.00