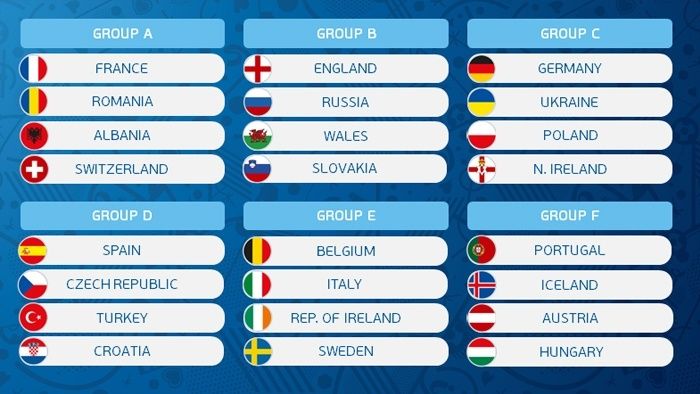 Euro 2016 group D kicks off on June 12th in Paris when Turkey takes on Croatia at the Parc des Prince. One day later, defending European Champions Spain will make their 2016 tournament debut playing the Czech Republic in Toulouse.

On paper, group D looks like one of the more difficult groups in this year’s UEFA Euro tournament, with anyone of the four countries likely to qualify for the next round. Be sure to check the at best sportsbooks online with your favourite deposit methods, like Instadebit.

Spain are not only favoured to top group D, but the Spanish are one of the favourites to win the tournament. Spain has won the last two European Championships, however, this time around, the Spanish squad doesn’t look as strong as in year’s past. That said, Spain only lost once in qualifying. Their only loss came at the hands of Slovakia in Zilina. Other than that one loss, it was pretty routine for Spain, scoring 23 goals and conceding three.

The names of the last two tournaments are slowly being phased out, with a crop of new players coming in. Yet, there are still some holdovers. Manchester City’s David Silva is one of them. Silva is expected to play on the right side of a 4-2-3-1 formation. Silva will float inside as he is not a true wide man, which could hurt Spain defensively. However, going forward, Silva will be a constant threat, putting in crosses or cutting inside with the ball on his left.

Spain has the opportunity to be the first three-peat winner and the Spanish have the experience and talent to do it. However, the Spanish squad isn’t the frightening tikka-takka side of the past. Topping the group will be a challenge, but Spain will make it through. A run to the semi-finals is likely, but Alvaro Morata will need to hit form in front of goal. Current odds to win tournament: 6.5

Despite giving up 14 goals in qualifying, the Czech Republic finished top of their qualification group. The 1996 runners-up will be ready to make a run deep into the Euro 2016 tournament, but do they have the goal scorers to take them to the quarter-finals? Defensively, the Czechs were suspect in qualify, failing to keep a clean sheet, relying more on outscoring opponents than preventing goals.

Borek Dockal led the Czechs in goal scoring through qualifying with four goals. The Sparta Prague player will be called upon to get the goals from midfield for the team again in this competition. Unfortunately, the strike corps doesn’t look impressive on paper, and the Czech Republic will need Dockal to lead the team forward in both creating and scoring.

The Czechs don’t score a lot of goals, and they give up too many. This will hurt the team at the Euro 2016 tournament. Group D will be difficult. The Czechs will need to take points off of Turkey and Croatia, as Spain will be too good for the Czechs to touch. Going through to the next round isn’t a sure thing, but if the Czechs do, moving on past the first knockout game won’t happen. Current odds to win tournament: 126.00

Turkey finished four points behind the Czech Republic in group A qualification. They will now face each other in the tournament proper on June 17th. Although Turkey finished third in the group, the Turks qualified for the finals by virtue of being the highest ranked third place team.

Much like the Czechs, Turkey does not score many goals, only 14 in qualifying, while giving up nine. Leading scorer in qualification, Burak Yilmaz, will be called upon to score goals to get the Turks through. The rest of the squad must step up if Turkey is to get out of the group. If they can’t score goals, the Turks must at least prevent them.

Arda Turan played just 15 times for Barcelona last season, with eight of those as starts. Turan is one of the best players to come out of Turkey in the last ten years. He hasn’t shown that at Barcelona, but he could prove his value with a top performance in France. Not only will he need to create goals for Yilmaz and company, but he will need to add a fair share, too.

Perhaps the biggest problem for the Turks and Czech Republic, is the lack of goals that they both score. A fight with the Czechs over third seems likely, and the Turks going home after the group stage could be on the cards. Current odds to win tournament: 81.00

Croatia finished behind Italy in qualifying group H after scoring 20 goals and conceding five. Croatia were impressive in the build up to the Euro 2016 tournament, keeping six clean sheets. The defence is made up of solid players that are just making a name for themselves – Sime Vrsaljiko, Gordan Schildenfeld, Ivan Strinic and Tin Jedvaj. Meanwhile, the starting midfield – Luka Modric, Mateo Kovacic, Ivan Rakitic and Ivan Perisic – is a brilliant corps of players playing at top European clubs. This team looks like a potential finalist. Whether Croatia can get there is the big question.

Luka Modric is coming off of Real Madrid’s Champions League title win. He played a key role in Madrid’s successful European campaign and brings his brilliant form into this summer’s Euro 2016 tournament. Modric will make the side tick. His passing, creativity and his pacing of the game will be vital in Croatia’s attempt at reaching the quarter-finals for only the third time in the country’s history.

What is not to like about Croatia’s chances at the Euro 2016 tournament? Croatia are definitely a darkhorse. Yet, they shouldn’t be. Modric, Mario Mandzukic and Darijo Srna are the veterans to keep the team focused during the difficult tournament. Croatia score goals, they prevent goals and they have quality throughout the squad. Sure, goalkeeper maybe a question mark, but Croatia has the chance to get out of the group stage for only the third time in their history. Croatia should be expected to do big things. The quarter-finals are a definite possibility, as are the semi-finals. Current odds to win tournament: 26.00.