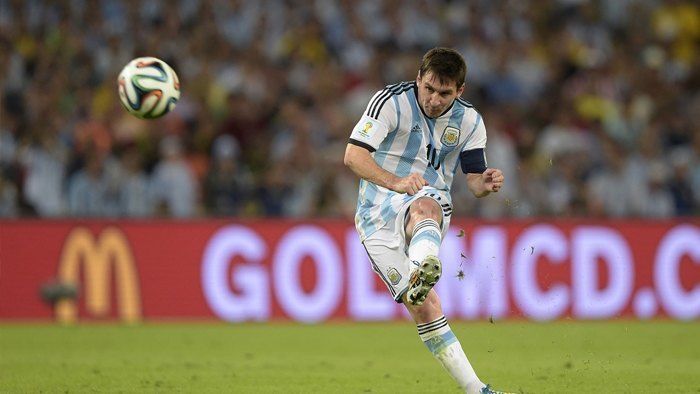 Argentina’s soccer superstar Lionel Messi has equalled the all-time goal scoring record for Argentina as the South Americans defeated Venezuela in the Copa America. Playing in the quarter-finals of the tournament that pits South and North American sides against one another, Argentina stormed to a 4-1 win behind Messi’s fourth goal of the tournament. Messi’s record-tying goal puts him level with former Argentina great Gabriel Batistuta.

The Barcelona forward has now scored 54 international goals for the Argentines, and will have the chance to break the record in the semi-finals against the United States. Messi also picked up two assists for Argentina as he continues to be the creator in the team’s side.

Messi's More than a Decade of Success

Messi made his senior team debut in 2005. However, Messi’s debut turned into a nightmare when he was sent off just two minutes after coming on as a substitute against Hungary. Only 18-years old at the time, Messi received his marching order after elbowing Hungarian defender Vilmos Vanczak.

Since that disastrous debut, Messi has become the most important player in Argentina and for his club side Barcelona. Messi led his Argentina side to the 2014 World Cup final in Brazil where the team was defeated by Germany 1-0. Meanwhile, Messi has led Argentina to two Copa America runners-up medals.

Despite being considered the best soccer player in the world, Messi has failed to succeed on the big stage with his national team. His inability to win major honours with the national team has drawn criticism from Argentina soccer pundits.

This season’s Copa America is the 100th in the tournament’s long and illustrious history. It is also the first of the tournaments to be hosted in the United States, rather than in South America. The tournament is an alternative to this summer’s European Championship taking place in France.

Argentina has not won the Copa America since lifting the trophy in 1993 in Ecuador. While the Argentines will take on the United States in the semi-finals, Colombia will play Chile in the other match of the final four.

All of the best online sportsbooks are showing around the following odds. Why not try out a bookmaker who's new to you? Sign up to a different betting site and take advantage of their sign up bonus?

Messi has long been considered the best soccer player in the world, although many argue that Cristiano Ronaldo has every right to that crown. During Barcelona’s La Liga season, the Argentine tallied 26 goals and 16 assists in 33 matches. Without him, Barcelona is regularly considered a shell of their typical selves when he is in the side.

While Messi has won everything there is to win in the club football game, he hasn’t been able to duplicate the trophy haul with Argentina. Due to his inability to replicate his form with the national team, Messi has been criticised by pundits and his own countrymen. Despite that, Messi continues to be Argentina’s best player as the country hunts for its first Copa America title in 23 years.