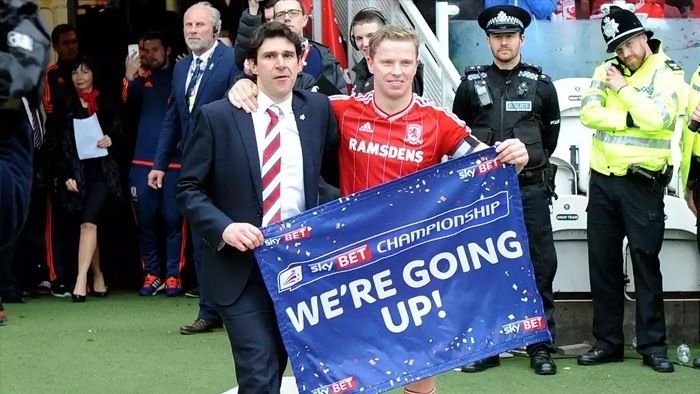 Cristian Stuani put Middlesbrough on top in the 19th minute, loading the pressure onto Brighton who needed a win due to their inferior goal difference. The Seagulls clawed a goal back on 55 minutes thanks to Dale Stephens. However, just two minutes later, Stephens’ high challenge on Middlesbrough’s Gaston Ramirez caused referee Mike Dean to produce a red card. His challenge left a cut down Ramirez’s shin and Brighton in an extremely difficult position. It was a position the Seagulls could not overcome and Middlesbrough held on. The club are now set to play in the English Premier League for the 2016-17 season.

Aitor Krananka: The Man that Changed the Boro

In just under three seasons with Middlesbrough, Karanka has improved on the team’s final league position each term. Prior to taking over the club, Middlesbrough had finished 16th in the Championship under Tony Mowbray. A 12th place finish in Karanka’s first, abbreviated, season with the club was followed by the previously mentioned fourth.

The former Real Madrid assistant has tallied a 54% win percentage since taking over at the Riverside Stadium. The club’s possession-based, passing game has been the envy of teams in the championship. Karanka’s success has seen the Spanish coach reluctant to confirm his status with the Championship’s runners-up for their return to the Premier League. A summer move away from the Riverside wouldn’t be unexpected, but highly disappointing for Middlesbrough supporters.

Karanka’s Middlesbrough were far from a “one man gang”, as eight different players tallied four or more goals during the season. Rather than one consistent scorer, Middlesbrough’s goal poachers all pitched in at various times during the campaign.

Seven goal man Stuani only scored once after New Year’s Day. Jordan Rhodes, who joined the club in the winter transfer window, notched six goals, yet five of which came after the 1st of April. Top goal scorer David Nugent, eight strikes, didn’t score after mid-March.

The Price of Success

According to Deloitte's Sports Business Group, Middlesbrough are set to gain £170 million following the club’s promotion to the English Premier League. A further £290m will be earned if the club can prevent relegation back to the Championship next term.

Since the club were relegated from the top-flight in 2009, the league has seen the landscape of the English Premier League change. New and improved television contracts and clubs outside of the usual “big” four are challenging the top of the table.

To think Middlesbrough could be another Leicester City is far-fetched. Yet, when the Foxes won the Championship in 2014, few would have expected Leicester City as English Premier League champions.