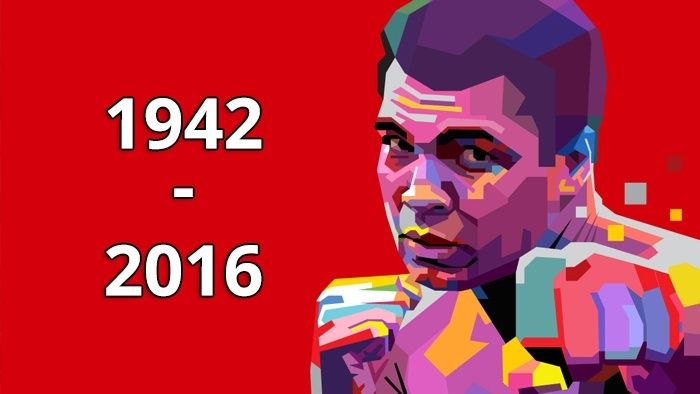 Iconic American boxer Muhammad Ali died at 74 in a Phoenix, Arizona, USA hospital on Friday night. The former World Heavyweight champion had been in the hospital for respiratory complications.

Since his death, an outpouring of emotion and respect has been seen in the sports world, for a man that was not only “the greatest”, but one that challenged society.

The three-time World Heavyweight champion had been fighting the longest battle of his life against Parkinson’s disease. Ali had suffered with the disease for 32-years, with it being contributed by some to the effects of his boxing career. Though doctors have said Ali’s Parkinson’s disease was down to genetics

Ali burst onto the boxing scene in 1960 during the Olympics in Rome. Then known by his birth name Cassius Clay, the fighter won the gold medal as a light heavyweight. Ali turned professional not long after the Rome Olympics. Making his pro debut in 1960, Ali quickly amounted a 19-0 record, taking on all comers and making a reputation for himself as a brash, trash talking fighter.

Nicknamed the “Louisville Lip” for his ability to produce headline-grabbing statements, Ali was quickly all over mainstream America. In February 1964, Ali finally got his chance to step into the ring with World Heavyweight champion Sonny Liston. What took place before and during the fight was pure WWE, but Ali won the fight in seven rounds, putting Liston down with a TKO.

Not long after his fight versus Liston, Clay converted to Islam, changing his name to Muhammad Ali. His conversion caused vitriolic abuse to be hurled at him across the US.

Ali’s affiliation to the Nation of Islam group didn’t help, yet the flash fighter won over his detractors in the ring. A rematch with Liston saw Ali defeat the out-of-shape former champion in less than two minutes. The fight caused many to cry “fix”, due to the nature of its ending.

In March 1971, Ali finally tasted defeat, losing The Fight of the Century to Joe Frazier in 15 rounds. After amassing a 31-0 record, Ali had finally lost, with critics expecting the end of the fighter’s career just around the corner.

After the defeat to Frazier, Ali work hard to regain the world heavyweight title. Top names (Floyd Patterson, Ken Norton) came and were knocked back as Ali pursued what was once his.

At the age of 32, Ali defeated Frazier in a rematch of The Fight of the Century, before taking on champion George Foreman in The Rumble in the Jungle. Ali regained his world heavyweight belts, on his way to a career that saw the world’s greatest boxer fight until the age of 39.

After obtaining a career record of 56 wins and five losses, Ali retired in December 1981. Ali had lost his last two fights, first to Larry Holmes and then to Trevor Berbick, and his body was slowing down.

Ali would be diagnosed with Parkinson’s not too long after his retirement, although many fans didn’t realise the toll it has taken on the former champion until seeing him light the Olympic torch in Atlanta in 1996.

Ali is still considered the greatest boxer of all-time. His trash talking has been duplicated by many in sports, including boxing and UFC. Yet, it is merely athletes attempting to be Ali. The power, passion and emotion will never be the same. Ali cut down racial and religious barriers in the US at an intense social time. He did his talking outside the ring and had the ability to back it up. He was an icon, a legend and a role model.

"I done wrestled with an alligator, I done tussled with a whale; handcuffed lightning, thrown thunder in jail; only last week, I murdered a rock, injured a stone, hospitalised a brick; I'm so mean I make medicine sick."