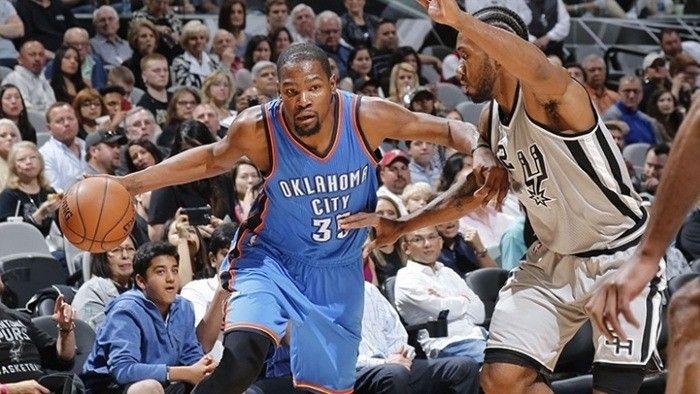 Oklahoma City Thunder forward Kevin Durant was vital in the team’s 111-97 win over the San Antonio Spurs in game four of the Western Conference semi-finals on Sunday night. Now with the series tied at two games apiece in the best of seven series, the teams return to San Antonio for game five. If you're looking for any online betting bonuses on offer before you place your bet on the next game, first consider some of the factors and predictions surrounding it.

The best scorer in the NBA

Durant was nearly unstoppable in the fourth quarter of game four, shooting six-for-six and bagging 17 points. Durant put in a 41 point shift on the night, carrying the Thunder over the line and giving OKC a shot at making the Western Conference final.

That will not be an easy task in game five, as both teams have split games on each other’s court thus far in the series. Durant’s 41 was the most any team had scored against the Spurs in 2015-16. The Spurs typically stingy defence was no match for Durant as the 6ft 9in forward torched them. Spurs should redeem themselves on Tuesday night in Texas.

While Durant is key to the Thunder in game five, the ageless Tony Parker will be important for the Spurs. His 22 points in game four kept the Spurs in the contest, but he needs more contributions from his frontline to get past OKC. Parker averaged 12 points and 5.3 assists per game in the regular season. He is the heart of the Spurs’ offence and the team will need a big night from him.

Who will stop Durant?

Spurs’ shutdown defender Kawhi Leonardo was unable to stop Durant in game four, but will be called upon again to prevent the OKC man from duplicating his performance.

Leonardo is a two-time NBA Defensive Player of the Year and was selected to his first all-star game in 2015-16. The forward averaged 1.8 steals and 6.8 rebounds per game in the regular season. At home in the Alamo Dome, Leonard and the Spurs will have home court advantage, something that should help the defensive Spurs.

The Thunder were blown out in game one of the series in San Antonio and only levelled things thanks to some dodgy refereeing in game two. Despite winning game four on their home court in OKC, the Thunder looked far from impressive in the first three games of the series.

OKC now has momentum, but the teams are returning to San Antonio, where the Spurs won 40 games and lost once during the regular season. The smart money for any online basketball bets would be on OKC after Durant’s monster game four, but in the NBA, home court advantage means a lot. The Spurs should get revenge from game four. Bet365 is offering a Spurs’ winning margin of 10-13 points at 11/2, which looks pretty tasty, as the team look to take control of the best of seven affair.