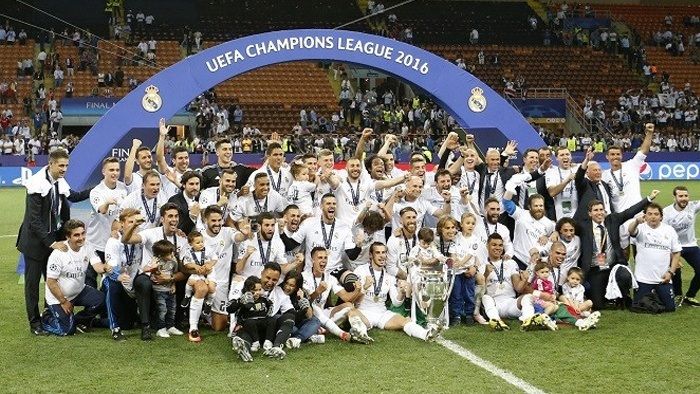 Real Madrid got off a fast start and it only took Los Blancos 15 minutes to draw first blood in the match. Toni Kroos’ free-kick was flicked on by Gareth Bale where it was put into the back of Atletico’s net by Real Madrid captain Sergio Ramos. The tough tackling centre-back has a knack for scoring big goals for Real Madrid, but replays showed Ramos to be a half step offside. Regardless, the goal stood.

For much of the first half Atletico Madrid were on the back foot, unable to get a leg up on their rivals. Sensing the match could get away from them, Atletico coach Diego Simeone made personnel and tactical changes at halftime. Yannick Carrasco came on for Augusto Fernandez and the team moved into a 4-3-3 formation opposed to the 4-4-2 Atletico had started with. The two moves paid off brilliantly as Atletico started the second period the aggressor.

Just after the re-start, Fernando Torres was taken down in the penalty area by Real Madrid defender Pepe. Atletico’s leading goal scorer Antoine Griezmann stepped up to take the penalty. However, Real Madrid goalkeeper Kaylor Navas put off the Frenchman just enough and Griezmann’s penalty slammed against the crossbar; leaving the scoreline in favour of Real Madrid.

Atletico continued to huff and puff, but couldn’t find the equaliser. In fact, Real Madrid nearly doubled their lead in the 77th minute. Atletico’s Stefan Savic made a game saving goal line clearance just as it looked like Real Madrid would put things to bed. Moments later, Atletico were counter-attacking and Carrasco, who had been brilliant since coming on, got on the end of a Juanfran cross to level the Champions League final at 1-1.

As extra-time loomed, Real Madrid looked the more tired of the two teams. The team had chosen to defend and keep their shape following the opening goal. Zinedine Zidane’s team allowed Atletico to have the lion’s share of possession, 49% to 51%, something that Real Madrid rarely permit.

The defensive and off the ball work had tired Real Madrid, and several of the players suffered cramps as the extra-time whistle blew for the start of another 20 minutes. Despite being the fresher of the two sides, Atletico still could not find a way through the difficult Real Madrid defence.

With Real Madrid leading 4-3 on penalties, Ronaldo stepped up to take the decider following Juanfran’s miss. The Portuguese star had had a very poor Champions League final, but his successful spot-kick decided the match, giving Real Madrid their 11th Champions League title.

Real Madrid coach Zidane had only been in the job for five months after taking over for Rafael Benitez. Since taking over for the former Liverpool and Chelsea coach, Zidane overhauled the team’s playing style, and Madrid finished La Liga strongly with 12 straight wins.

Real Madrid finished second to La Liga winners Barcelona, one point off of the Spanish title. However, Real Madrid will take comfort in another Champions League final win and the possibility of overtaking the Catalans in next season’s La Liga.

Atletico Madrid have now lost the Champions League final twice in three years to Real Madrid. The club have come so close again, but ended another season empty handed. Rumours have now emerged that Simeone could exit Atletico Madrid this summer. The club are set to move into their new stadium, the Estadio La Peineta, ahead of next season, but could do so without their talismanic coach. Should that occur, be sure you stay tuned to the best sports betting websites for all the best odds and bonus options available.

Numerous teams in Europe are sniffing around both Simeone and Atletico’s Griezmann. The club have brought through some of the best attackers in Europe in recent years, and may have to again to get back to another Champions League final.