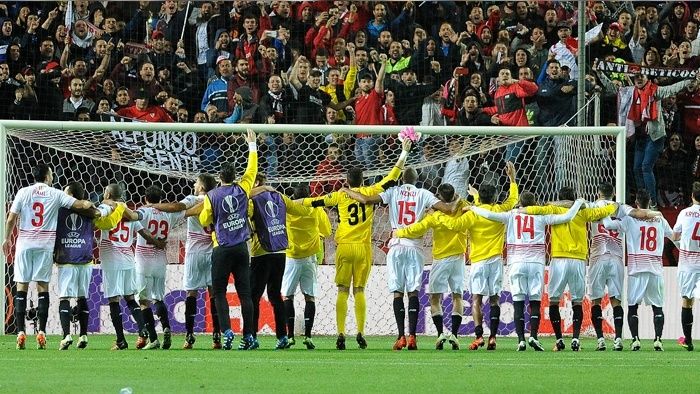 Sevilla are Kings of the Europa League

With four UEFA Cup/Europa League triumphs in ten years, Sevilla have proven they are the kings of the competition. The Spanish side have collected the most trophies in the competition, and this year have the opportunity to make it five wins in the tournament.

More remarkably than winning it for the fifth time is that Sevilla are playing in their third consecutive final, winning it in each of the last two seasons. The 2014 instalment saw the Andalusian club defeat Portuguese team Benfica on penalties, while last May, Sevilla defeated Ukrainian team Dnipro 3-2.

This season’s task is to defeat Liverpool after both club’s made it through to the final in Basel with comprehensive semi-final second leg wins.

Despite sitting seventh in La Liga, Unai Emery’s team have been an unstoppable Spanish force in the Europa League. Five wins and two draws from eight Europa League fixtures, Sevilla have conceded only seven times, while scoring 14 goals.

The best manager in Spain no one knows about: Unai Emery

Unai Emery has masterminded Sevilla’s run through the last three chapters of the club’s Europa League story. In 42 Europa League matches since taking over the Sevilla manager’s position in 2013, Emery’s team has secured 27 victories opposed to five losses. In addition, the Spaniards have tallied 92 goals as they have scored freely at times in the competition.

Sevilla’s management stability can be credited with much of their success in the tournament. The 2006 and 2007 finals wins against Middlesbrough and Espanyol, respectively, were overseen by Juande Ramos. His second win as coach made Sevilla the first club to be repeat champions in successive years.

In the six years between Ramos’ cup wins and the arrival of Emery, Sevilla saw five coaches come and go. Since Emery’s arrival, stability – at least in the Europa League – has returned to the Andalusians.

Kevin Gameiro has been Sevilla’s most prolific scorer tallying seven times in the competition. His play at the top of Emery’s 4-2-3-1 formation has been outstanding. Excellent at holding up the ball and a clinical finisher, the Frenchman is averaging 2.8 shots per game. Gameiro’s 24 goals in all competitions has come as a surprise after the club’s signing of former Juventus striker Fernando Llorente last summer. Llorente has made 27 appearances in La Liga and the Europa League this term, tallying a mere four goals.

The key to the Europa League final against Liverpool will be whether or not Sevilla can handle the Reds’ defensive pressure. Sevilla average just below 50% possession per game and are willing to give up possession to hit oppositions on the counter attack. Liverpool’s defensive pressure will need to focus on Sevilla’s midfield maestro Ever Banega, who is averaging a pass success rate of 84.4% in the competition. Banega will most likely do battle with Emre Can as the Liverpool midfielder should be tasked with man-marking Sevilla’s creative sparkplug.

Is everyone underestimating Sevilla?

Sevilla are good value to win the final. Bet356 has them listed at 21/10. It seems most pundits are expecting Liverpool and Jurgen Klopp to walk out of Basel with the Europa League trophy. However, Sevilla are being underestimated, the club are not two-time defending champions for nothing. Sevilla may very well break up the Liverpool final party, and become the first back-to-back-to-back winners in Europa League history; and possibly the last.