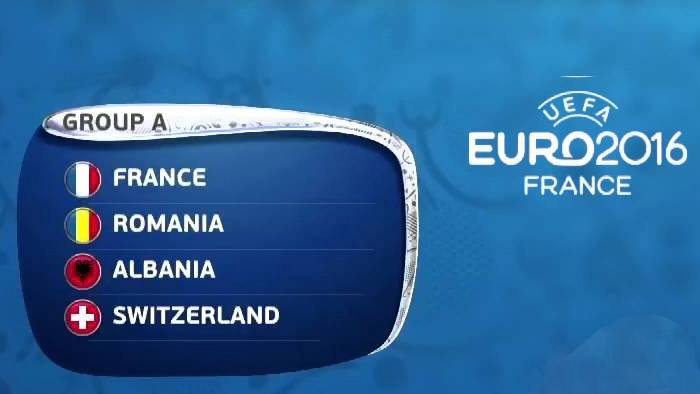 UEFA Euro 2016 host France headline the four teams that make up Group A at this year’s tournament. The French qualified automatically and are being tipped as one of the favourites to win the 2016 Euro competition by sportsbooks, including Bet365.

Meanwhile, Group A will see debutants Albania play in their first major tournament, after a second place finish in qualifying.

Romania and Switzerland round out Group A after both finished second in their respective qualifying groups. The Swiss qualified behind group winners England, while Romania just missed out on top spot, one point behind Northern Ireland.

Tipped by many to win the tournament, France for the 2016 UEFA Euro Championship boasts an impressive roster of players playing for top clubs across Europe. Hugo Lloris, Paul Pogba and Antoine Griezmann are just three of the players that France will have in a stellar squad.

The Didier Deschamps’ team is stacked with proven players at the club level. However, the French have underachieved since finishing runners-up at the 2006 World Cup in Germany.

France look solid in both attack and midfield, but the defence could be the country’s undoing this time around. Patrice Evra is 35, Jeremy Mathieu has just been ruled out with injury and Adil Rami is often an accident waiting to happen. The French could blow their chance at glory due to a subpar defence.

The midfield is good enough to make up for it. However, the big question is: can the midfield protect Deschamps’ backline long enough to see them through to the final?

France has produced some of the best talent in football over the last ten years, and current Juventus midfielder Paul Pogba is no exception. Pogba has won four straight Serie A titles with Juventus and the Euro 2016 tournament is his opportunity to take his game to another level.

Currently the tournament favourite, France should have no problem getting through to the knockout round. Switzerland should be their biggest rival in the group, but first place in Group A is France’s to lose. Current odds to win tournament: 4.33

The Swiss will have the likes of Stoke City’s Xherdan Shaqiri and Arsenal new-boy Granit Xhaka available for this year’s tournament. Yet, compared to France, Switzerland lack the same quality all the way through their squad.

The Swiss will be hard to beat, they typically are, but the team do not have the talent to make a run deep into the tournament. The lack of a quality striker will severally hurt Switzerland’s chances at the Euro 2016 tournament.

Eren Derdiyok’s 13 goals in the Turkish Super Lig was the best of any Swiss striker. Relying on Derdiyok to score enough goals to get the team deep in to the tournament is a tall order and something he doesn’t have the track record to do.

Xherdan Shaqiri has long been a player with loads of potential. However, he has only shown what he can truly do in small doses. Already rumoured to be leaving Stoke City, Shaqiri found his time at Bayern Munich and Inter Milan to be difficult.

A move to Stoke City last summer was supposed to push the English team into European qualification. That didn’t happen and Shaqiri finished the season with only three goals and six assists.

On his day, however, Shaqiri is a brilliant player. When he isn’t on form, he is an enigmatic midfielder. Can he hit form at the right time in France? That is what the Swiss are asking themselves right now.

The Swiss will battle Romania for second place in the group, and could even fall to third. The top four third place teams make the knockout stage and Switzerland could move into the second round with enough points from the group stage.

The Swiss should beat Albania, but will have trouble with France. Their match against Romania on June 15th may determine if Switzerland move on to the next round, or go home. Current odds to win tournament: 68.00

Of Romania’s 28-man-provisional roster, only four men play in one of the top five leagues in Europe: Ciprian Tatarusanu (Fiorentina), Razvan Rat (Rayo Vallecano), Costel Pantilimon (Watford) and Vlad Chiriches (Napoli). That does not mean, however, that Romania can be taken lightly. With little known about Romania’s players, it makes them a dangerous team at the Euro 2016 tournament; giving them the opportunity to pick off some of the top-tier countries.

Romania finished second in their qualifying group, but it must be said, their group didn’t look very difficult on paper. Keep in mind, Romania didn’t lose a qualifier, winning five and drawing five. Romania kept eight clean sheets in qualifying and were the masters of the nil-nil draw, playing out three consecutive scoreless draws in qualification.

Ciprian Tatarusanu played 37 times for Italy’s Fiorentina during the season making just under two saves per game. The Romanian had a solid season in goal for the Viola and helped lead the team into a fifth place finish in Serie A. The club gave up only 42 goals in the league, the sixth fewest of any team in the competition, and Tatarusanu was one of the key reasons for such an excellent defence.

The match against Switzerland could make or break Romania’s tournament, but they must not take Albania lightly. Romania could sneak up on France, but a second place finish will be a job well done. Current odds to win tournament: 261.00

The Euro 2016 tournament will mark the first ever major competition for Albania after successfully qualifying ahead of Denmark in Group I. Their second place finish, however, was partly due to an abandoned match against Serbia in qualifying. If that match had been played out, the Albania’s may have finished third in the group.

Regardless, Albania is at the tournament, with many expecting the country to merely make up the numbers. They are the longest shot by odds makers, but keep in mind they took three points from Portugal in qualifying. Cristiano Ronaldo’s Portugal then needed a stoppage-time winner to beat them in the return match. Albania maybe underdogs, but they have heart.

Nantes defender Lorik Cana will be at the heart of Albania’s defence. Over the years, Cana has shown himself to be a tough tackler and leader of men. Albania will need both against the likes of France’s free-flowing attack and Switzerland’s smooth passing midfield.

Albania currently have the longest odds of winning the Euro 2016 tournament. If the Albanians can sneak a win, which is highly possible with their defence, and pull out a draw, anything is possible. Nothing more than the second round should be expected, if that. But if Albania can make it to the knockout stage, it will be seen as a success. Current odds to win tournament: 501.00.