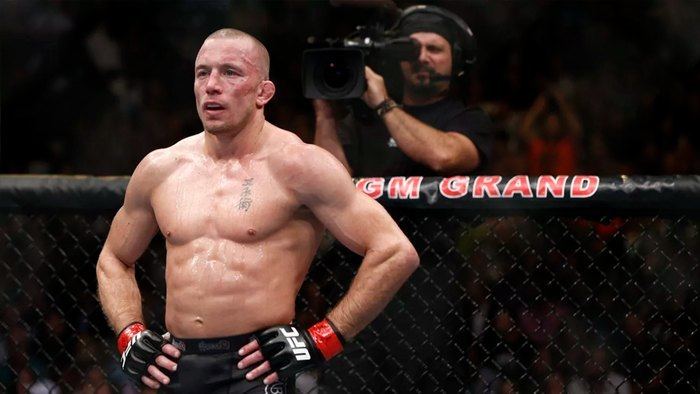 Ultimate Fighting Championship legend George St-Pierre is ready for a return to the octagon, and he explained that negotiations are ongoing with the company over his arrival. The mixed martial arts fighter, now 35, hasn’t fought since 2013 when he defeated Johny Hendricks via split decision in a UFC Welterweight Championship defence.

St-Pierre was one of UFC’s biggest stars when he originally hung up his gloves nearly three years ago. The Canadian, who totalled a 25-2 MMA record has now ended his retirement, citing his age being one of the main factors for his decision to return to the world of UFC.

“I love my sport and I still feel I’m at my best right now,” St-Pierre stated on The MMA Hour podcast. “The clock is running. I’m not getting any younger. I’m in the peak of my career and if there is a shot, there is another goal, another run, I better do it and do it quick, because it is time to do it now.”

St-Pierre began his MMA career fighting in 2002 for the Ultimate Cage Championship where he defeated Ivan Menjivar in his hometown of Montreal, Canada. St-Pierre slowly worked his way up to the UFC and debuted for the fighting company in January 2004. However, he was quickly set back in his rise to the top. St-Pierre was defeated in his third UFC fight by Matt Hughes via submission.

After stepping away from UFC, defeating Dave Strasser on a TKO Major League MMA card, St-Pierre returned to the UFC, beating Jason Miller in April 2005. Over the next seven and a half years, St-Pierre built a reputation as one of the premier fighters in MMA, main eventing numerous UFC cards.

In March 2006, St-Pierre won his first UFC Welterweight Championship from B.J. Penn. However, St-Pierre made a mere one defence of the title before dropping it to Matt Serra via technical knockout just over a year later.

St-Pierre would redeem himself, defeating Serra in the return match in April 2008. From there he would solidify himself as the top welterweight in the world, and many claimed during his time at the top, that St-Pierre was the best MMA fighter regardless of weight class.

St-Pierre was not only a key to UFC in the octagon, but he was extremely valuable to the marketing of the fight company, too. St-Pierre has a squeaky clean image compared to many of his MMA contemporaries, and his disinterest in cutting down opponents in interviews was seen as giving the sport legitimacy in the media.

In his interview with The MMA Hour podcast, St-Pierre spoke about returning and the fact that a return could be a no-win situation.

“I have a lot to lose in this, because I finished on top,” St-Pierre explained. “I finished as champion, and that’s the way everybody would like to leave the sport—on top, healthy, and wealthy—and I did it. If I go back and, it needs to be for something big. I think for my first fight, it needs to be for something big, and that’ll give me the swing and the momentum to do it again and again and again for another run.

“So it depends on what it going to happen, but I have a lot to lose, but the thing is also, the reason why I’ve been thinking of coming back, is I don’t want to end up at 80 years old and telling myself, ‘I should’ve done this, I should’ve done that.”

UFC have three major events scheduled for July 7th through the 9th, culminating in UFC 200. The show will feature a double main event featuring the UFC return of Brock Lesnar. If you're planning on wagering on the fight, Ladbrokes have Brock Lesnar at 2.40 against Mark Hunt on July 10th 2016. Plus you can see all the odds and - for dedicated UFC fans - all the markets available for the entire event schedule, including total rounds, method of victory and more.

And for those of you new to wagering via online sportsbooks, why not take up any of the bonus offers available from the more reputable ones and have a go? There are various sign-up bonuses on offer. And other promotional deals too. For Ladbrokes, for instance, you can get up to £50 in free bets. So, say your first bet is £10, then your free bet value will be £10. But if your first bet is £50, then you get another £50 for your free bet. If you bet £100 first up, then you just get £50, but you're still £50 better off and you have the chance to bet again with your free bet. Read the T&Cs online to make sure you're clear with what you can and can't do with your free betting money. Other than that, you can choose how you want to bet with that extra betting cash... lay it all on your favourite, hedge your bet, or split it up between a few fights and markets. More chances, more chance to win. Good luck!