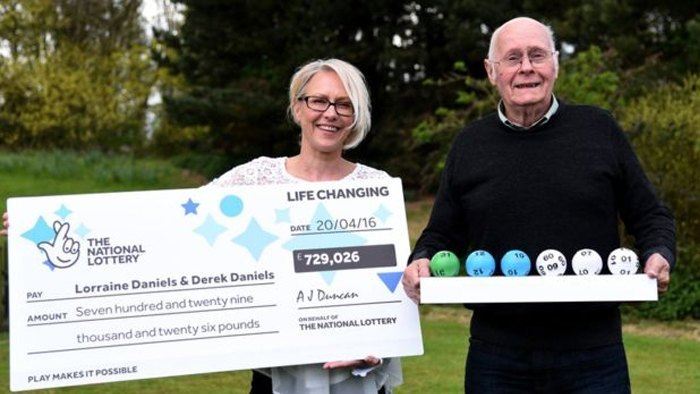 One of the best things about online lottery results is how it changes lives – most especially for those who need it most. Last week, lives were changed once again! A father and daughter tandem from Whittlesey celebrated their recent  lottery win with a pledge to give their community a part of their winnings as thanks for helping them in their time of need.

Giving Back to their Community

Lorraine Daniels, aged 41, and her dad Derek Daniels, aged 77, won a grand total of £729,026 in the UK National Lottery draw held last Wednesday, April 20, 2016. They expressed that they wanted to give back to their “amazing community” who helped them raise funds for Lorraine’s daughter Lotus.

Before buying a winning lotto ticket, Lorraine and Derek were given almost £4,000 by the community last year, following a massive fundraising campaign. The money was raised in order to buy Lotus a special bed. She was diagnosed with severe epilepsy at just 19 days old.

“Who would have thought that when we placed that order, before the bed had even arrived, I would have won the Lottery and can now pay back the community so the money can go to another worthy cause,” said Lorraine.

Six-year-old Lotus had to be put in an induced coma three years ago, because she was having up to 300 epileptic fits in a day. She then had to undergo a nine-and-a-half-hour operation to have the right side of her brain removed. Lorraine said that Lotus “baffled all the doctors and specialists” who predicted a very limited quality of life for her. Since her operation, Lotus is incredibly learning how to walk again and communicate through sign language. In addition, Lorraine said that Lotus is doing “really well at school.”

Lorraine said: “It’s now my turn to pay it forward. It’s an amazing feeling, but also a bit odd, it hasn’t sunk in. I’m now in a position that I don’t have to worry about the future or ask people for help.”

“All our heartache and worry for Lotus’ future is over”

Lorraine and Derek are making their donation to the local rotary club, which will in turn distribute the money fairly. Father and daughter have played every lottery draw since the birth of Lotus. When it came to how to choose lottery numbers, there was no need for a lotto number generator. Derek and Lorraine always used a number combination of Lotus’ birth date, baby weight, the room she was born in and the day she was christened.

When asked about the moment they found out they beat lottery statistics and odds, Derek said, “We were sitting there somewhere between stunned and crazy. We kept thinking about all the things that were now possible and how all our heartache and worry for Lotus' future was over.

Aside from helping the community, Lorraine plans to use her share of the winnings to buy a house and take Lotus out on a well-deserved holiday.

Just like Lorraine, Derek and Lotus, you have the chance to change your life for the better in an instant! If you buy a UK National Lottery ticket now, you can change the lives of your loved ones, as well as your community.