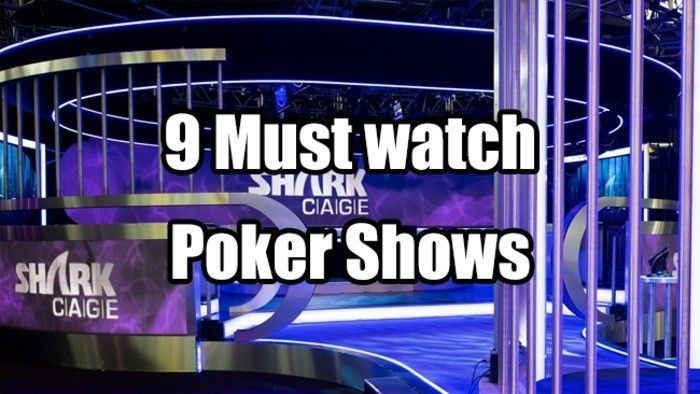 Poker is definitely seeing a rise in popularity, especially when it comes to international poker tournaments and top online poker sites. More and more people are getting interested in poker television shows to keep up with the action.

Poker in television began in 1997 and it has only been getting stronger ever since. There are regular shows, seasonal shows, as well as celebrity poker games and high stakes action. If you have a hard time narrowing down which ones you should tune into, then check out this list of nine must-watch poker shows!

1) The World Series of Poker

In many ways, the World Series of Poker is a staple for anybody who is interested in poker. Even for newbies who are still learning how to play poker, the WSOP will be downright entertaining. ESPN holds the rights to this most revered and highly-rated poker tournament. In 2015, the WSOP featured 68 bracelet events, all leading to the final table in Las Vegas.

ESPN highlights of WSOP are screened regularly with two hour slots running towards the main event stage. Check out the WSOP site for the latest online poker offers.

Over the past decade, the World Poker Tour remains one of the pillars of TV poker programming. After the first show aired in 2003, it didn’t take long for this show to be one of Travel Channel’s highest rated program. The show then moved to Game Show Network in 2007, and later to Fox Sports Net.

The WPT first featured the hole card cameras – cameras that show the cards players hold as the hand develops – which was instrumental in paving the way for all of the poker shows on television today. The WPT is still a great tournament to watch for those who want to learn new tricks and tips from poker pros. The winners of WPT regularly take home prizes of over US$1 million.

Pokerography is a show for both poker players and fans. This show is done in the style of a documentary series and profiles some of the greatest poker players in the world. The show not only outlines their path to poker success, but it also gives a great deal of insight into the poker rules, techniques and characteristics that helped them excel in the game. The show features the skills these players developed, as well as the mistakes they made.

Some of the episodes that this show has produced so far feature poker heavyweights like Vanessa Selbst, Erik Seidel, and Phil Hellmuth.

High Stakes Poker was one of the most popular shows to hit television. Players not only watched and recorded the episodes, but they also discussed and analyzed the poker hands in great detail in forums and articles. It has since stopped filming new episodes, but the show is still aired in many channels like Poker Central. Some episodes featured the most popular players take on celebrities and businessmen. These episodes were absolutely fascinating to watch. The level of excitement even got higher because the high rollers played with stacks of cash on the table, as the minimum buy-in was at US$100,000.

The European Poker Tour is another famous series of poker tournaments. The EPT began in 2004 as part of a worldwide explosion of Texas Hold ‘em popularity. The EPT features 13 stops on its schedule of events every year. These spectacular European stops include Berlin, Prague and Vilamoura.

The tour is aired on television and is distributed throughout Europe and the rest of the world. What makes EPT different and worth watching is its setup. The final table is made up of eight players, instead of six. For many of the players who call EPT home, the journey to life-changing prizes all began with free poker games online where they honed their skills before challenging for glory on the EPT tables.

For amateur poker players who are still working to improve their skills, a great show to watch is the Heartland Poker Tour. The tour primarily features several cities in the Midwest. No matter what the host casino is, the center of the show is always the players. With low buy-ins, the final tables usually consist of recreational poker players or pros who are moving up to higher stakes in their career. Watching the Heartland Poker Tour is both informative and entertaining for the viewers.

All fans of live and online poker tournaments should tune in for some episodes of the European Open. Like the EPT, this show features predominantly European players, so it gives viewers some insight into various styles of play and player personalities. The show begins by playing heats. As more players are eliminated, the action builds up to semi-final heats and last-chance turbo heats. The final round then pits the top finishers against each other for the pool prize.

The great thing about this show is that it features both high-profile pros and qualifiers who sometimes make it to the final. This mix of players makes the European Open interesting and educational.

If the title of this show is not enough to pique interest, then the winner-take-all prize of US$120,000 will. Poker After Dark features six participants to buy in for US$20,000 in a sit-n-go game. What makes the show even more interesting is that some of the episodes are themed. Some episodes feature eccentric players, talented female poker players, and other similarly-grouped competitors.

Known poker players like Doyle Brunson and Phil Ivey have been in a number of episodes of Poker After Dark. While the action at the table is great, the table talk is even better.

The Shark Cage is a made for television production created by PokerStars wherein professional poker players and qualifiers will compete for US$1 million. The show includes eight heats, all filmed at EPT events. Each heat will include five professional poker players and one qualifier. They will all play for a seat at the final round which will be a winner-take-all event.

What makes the Shark Cage exciting is the “BLUFF” button. If a player successfully bluffs an opponent, the opponent has to head to a cage for an orbit. If the opponent calls the bluff, the player has to the one to spend an orbit in the cage. Another element in this show is the “Shot” clock, which only gives players 30 seconds to act on each hand.

What makes this show entertaining are the players themselves. There are rarely any tight players in this show, because they won’t be much of a good fit for it. What the Shark Cage has are loose and aggressive players who keep trying to put other people in the cage. To see what else PokerStars has to offer, sign up for the PokerStars website.