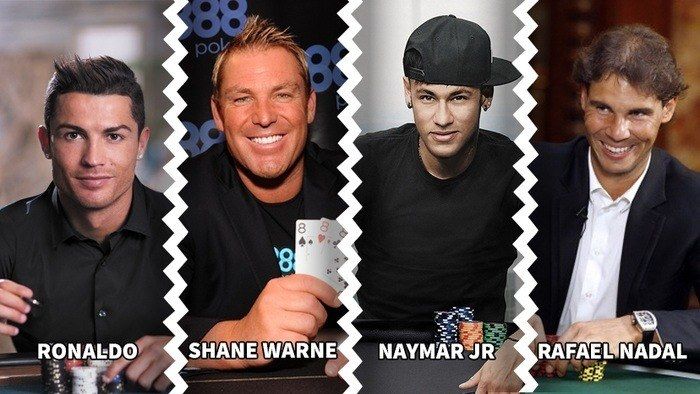 Whether it’s high-stakes tournaments or casual games just to pass the time, some of the biggest stars of the sports world are passionate about the game of poker. From soccer superstar Cristiano Ronaldo to tennis champion Rafael Nadal, many top athletes have turned their hand to poker as secondary careers or hobbies.

So what is the allure of poker for both current and former sports stars? For some, it’s the feeling of familiarity that they find in an outlet for drive and performance. For others, it’s the sense that poker is a contest that plays out on a level playing field. After all, poker is a game of both skill and luck, in which the chances of winning are equally favorable to all of the players on the table.

Take a look at some of the most talented and famous athletes who enjoy playing poker live or playing poker online just as much as poker professionals do.

Rafa Nadal is one of the most celebrated tennis players of today. He has an astonishing nine French Open championship victories under his belt, as well as other Grand Slam Singles titles. He has won Wimbledon twice, the US Open twice and the Australian Open.

Nadal joined Team PokerStars Sport during a convalescence period from a knee injury in 2012. Although Nadal has not yet been featured in a live poker tournament, he is found online at PokerStars. He won his first competition in a €10 freeze-out tournament for a €15,200 first prize.

Boris Becker is a proud winner of six Grand Slam Singles titles. He burst onto the tennis scene as a teenager back in 1985 and became an instant sensation when he won his first Wimbledon Singles title at the age of 17.

Becker went to join PokerStars in 2007. He can be found playing regularly in live tournaments around Europe. He has close to US$100,000 in tournament winnings. His biggest prize winning was when he finished in 40th place in the World Poker Tour Championships is Las Vegas for US$40,855.

Michael Phelps is one of the most decorated Olympians of all time, having won 18 gold medals. Phelps is nicknamed “The Baltimore Bullet” and the “Flying Fish” to reflect is jaw-dropping swimming performances.

Phelps has been seen on numerous occasions playing poker, particularly at high buy-in events such as the European Poker Tour and the World Series of Poker.

Former NFL player Richard Seymour has been described as the best defensive lineman in the league. Seymour played for the New England Patriots and has joined several Super Bowls and Pro Bowls in his career. It was Seymour’s father who first introduced him to poker rules and techniques.

When asked about poker, he says: “it's all about the competition. With tournaments, everyone starts equal. It's not about the money, it's about the love of the game. Sports people love to compete on the highest level. The only way to get better is to compete against the best. I enjoy the moment. I enjoy the pressure.”

Kyran Bracken is a Rugby World Cup winner who won a total of 51 England caps and captained the team on three occasions. Bracken played poker on the tour bus with his Saracens and England teammates. He says that it was his mother who taught him how to play poker.

“She was a great bluffer,” Bracken said. “After a night of poker, I'd make sure I was up first in the morning to find any spare coins lost under the card table!”

According to Bracken, bluffing is a similarity between playing poker and rugby: “The macho posturing of bluffing is like something you'd see on the rugby pitch. It's like, 'I accept the challenge and I'm going to beat you.' It's the same mentality. You're going into battle, it's 'I'm the strongest!' – it's gladiatorial.”

Bracken has competed in PokerStars Shark Cage, one of the must-watch poker shows of today. Shark Cage pits celebrities against professional poker players for a cash prize of £1,000,000.

Paul “The Truth” Pierce is a professional NBA player for the Los Angeles Clippers. He has also played for the Washington Wizards and Boston Celtics in the past. Pierce is one of only three players – alongside John Havlicek and Larry Bird – who have scored over 20,000 points in their career with the Celtics alone. Pierce holds the Celtics' record for most three-point field goals made.

Pierce joined the World Series of Poker Main Event in Las Vegas in 2013 and 2014. According to this basketball star, poker has “taught [him] how to play smart and essentially how to be patient with [his] game.”

Shawn “The Matrix” Marion has played in the NBA for 16 solid years and knows that although basketball is a physical game, it also requires great mental concentration. The 2014-2015 NBA season is said to be the highlight of his basketball career.

Marion has found joy and fun in playing poker tournaments. “I love playing poker,” he said. “I might turn pro when I get done playing ball. You never know.” He has played with high rollers in the World Series of Poker in 2011. When asked what he preferred – poker tournaments vs. cash games – he answered: “Tournaments are hard to play. I’m a cash game type of guy. You have to be patient, wait for cards and sometimes you wait for so long, you get antsy.”

Ronaldo created a sports and entertainment agency called 9ine, which lead to his interest in understanding the best poker hands and strategies. He is part of Team PokerStars. He said: “I always bring the intensity, flair and determination I show on the football pitch to the poker tables. I love the game, and I’ve always loved the challenge of beating my opponents one-on-one. By joining the world’s biggest poker site, I can test my skills against the game’s best players and become one of them.”

Neymar is one of the most promising and exciting soccer players today. This Brazilian forward has already scored more goals than Ronaldo and Lionel Messi when they were at the same stage in their careers. He is considered to have one of the best attacking line-ups in the history of the sport.

This top athlete is an avid poker fan. He claims, “Poker is a huge passion of mine. It allows me to express myself away from the pitch, and I love any chance to outwit my opponents, show my skills, and beat the competition. Now I want to push myself against the world’s best players. I want to experience the thrill of PokerStars games and see if I can win poker’s biggest prizes!”

Unfortunately for Neymar, sometimes his age gets in the way of competing at poker tables. This 24-year-old has been restricted from playing as part of PokerStars Dream Team Collection because the United Kingdom Gambling Commission stated that “No one who is, or seems to be, under 25 years old may be featured gambling or playing a significant role.”

Perhaps we’ll see more of Neymar at live poker tournaments next year, when this soccer superstar turns 25. In the meantime, young aspiring players like him can always check out the latest online poker freerolls.

Shane Warne was one of the best spin bowlers the game of cricket has ever seen. He took over 1,000 wickets in his long, illustrious career.

Warne joined one of the most popular online poker sites, 888.com in January 2008 and has since been a regular at sponsored events, such as the World Series of Poker Asia Pacific and the World Series of Poker Europe. He was won close to AU$50,000 in live tournament winnings. His biggest tournament success was in 2010, when he finished third in the Victorian Poker Championship in Melbourne.

Warne explains how he finds moving up to higher stakes in poker is similar to playing cricket: “That patience you need to show in a test match – that's five days, 13 hours a day – you need to have that at the poker table too. You've got to ride the ups and downs, be patient and wait your time. You've got to work out batsmen, same as you've got to work out the poker players. There are so many similarities with strategy, because cricket's a strategic game too.”

He adds, “When you come up against a player in cricket that you've never seen before, you have to work out where they're strong, where they're weak, how they play. You've got to work out their personality pretty quickly so you can work on that too, which is very similar to poker.”