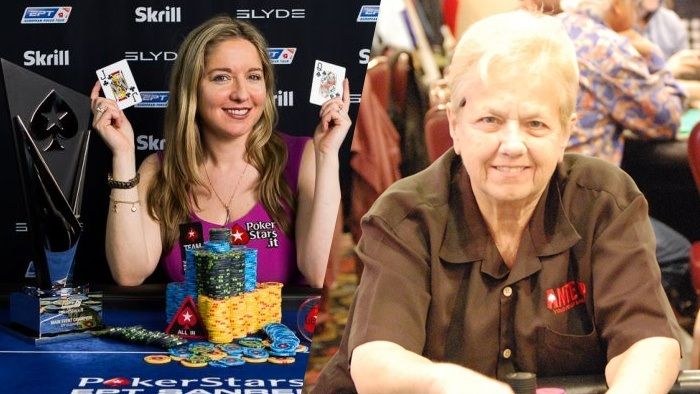 2 New Inductees for Women in Poker Hall of Fame

Last February, we compiled a list of powerful female poker players who we believed deserve to be inducted into the 2016 Women in Poker Hall of Fame. Well, we are delighted that one of those women along with another deserving poker player are both set to join the ranks of Jennifer Harman, Linda Johnson, and Billie Brown.

On a special ceremony to be held on July 6 at the Gold Coast Casino, Las Vegas, Victoria Coren-Mitchell and Debbie Burkhead will be inducted into the Women in Poker Hall of Fame (WIPHOF) 2016.

Coren-Mitchell and Burkhead were selected by the WIPHOF panel which consists of Lupe Soto, Karina Jett, and Suzie Lederer. Former WIPHOF inductees and select members of the poker media also played a part in choosing the new inductees.

Burkhead is well known for being both a poker writer and player. For ten years, she contributed pro poker tips and other poker-related topics through a column entitled Debbie Does Poker under the Poker Player newspaper. Aside from that, she also worked for Poker Digest, Ante Up Magazine, and the now defunct Pokerpages.com.

Burkhead also proved to be a strong poker player as she has won nearly $200,000 through live tournaments. It was in 2007 when she impressively scored and won a $22,890 ladies event at the Orleans Open. To date, she has cashed in four World Series of Poker (WSOP) events.

If you take a look at the short-listed candidates for the WIPHOF, you can easily see that Coren-Mitchell was the most decorated poker player among them all. She is notable for being the only player to win two European Poker Tour (EPT) Main Events after victories in San Remo (Season 6) and in London (Season 3). Coren-Mitchell was also one of the top professional players under PokerStars. However, she left the team after the site’s decision to include online casino games into their poker product clashed with Coren-Mitchell’s values.

Off the poker tables, Coren-Mitchell also works as a broadcaster and an author. She hosts Only Connect and occasionally Have I Got News For You. She wrote several books including For Richer, For Poorer: A Love Affair With Poker. Coren-Mitchell also runs a weekly column for The Observer.

Public Vote on The 2016 WIPHOF

This year’s selection process was quite different from the previous ones as it was the first to supposedly include the public’s say. An online voting system was organized by the WIPHOF. However, it was later scrapped when the committee learned that users delete cookies on their computers and mobile device to repeatedly vote through a single IP address.

Right before the online voting system was removed from the WIPHOF site, Shirley Rosario was leading the race, taking 33% of the votes. World Poker Tour’s Mandy Glogow trailed after her with 26% of the votes and Coren-Mitchell came in last.

Karina Jett, Jennifer Tilly, and Esther Rossi were among the shortlisted candidates. Coren-Mitchell would be the first European player to be inducted into a Poker Hall of Fame.

Qualifications for the Women in Poker Hall of Fame

Victoria Coren-Mitchell and Debbie Burkhead were able to meet the five requirements set out by the WIPHOF's board. Here they are as follows: