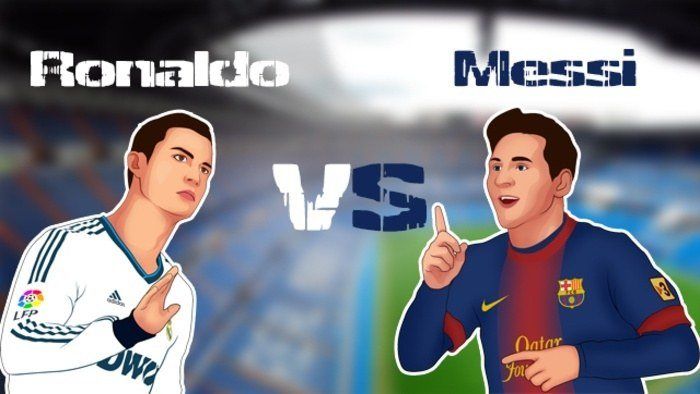 Messi vs. Ronaldo: The Truth Behind the Stats

The Messi vs Ronaldo rivalry is the most heated rivalry in the soccer world. Both Lionel Messi and Cristiano Ronaldo are regarded as two of the best soccer players in the world for their generation. Both have won FIFA Ballon d'Or awards, both have scored two UEFA Champions League finals and both have scored over 400 goals for their club and country.

Soccer is one of the top sports to bet on, so it’s no wonder that fans regularly argue about the merits of these two players in order to determine which is the better player in modern European football. The Messi vs Ronaldo rivalry has been compared to other historical sports rivalries, such as the Björn Borg vs John McEnroe rivalry in tennis and the Muhammad Ali vs Joe Frazier rivalry in boxing.

When it comes to Messi and Ronaldo, fans talk about physiques, techniques, playing styles, achievements and even personalities. The most common depiction of Ronaldo’s personality is theatrical and arrogant, while Messi is portrayed as the shy and humble character.

So this is a showdown of the most celebrated soccer players today. We’ll reveal all the figures surrounding their success and you decide which one comes out on top.

Both Messi and Ronaldo are players to rely on with soccer scoring odds and predictions. In this first round, we have the totals of goals, assists and appearances of Messi and Ronaldo. These figures begin from 2009, when Ronaldo moved from Manchester United to Real Madrid, when both Ronaldo’s and Messi’s senior careers took off.

It seems that in this round, Messi has the upper hand, albeit slightly. The number of goals, however, is not the only criteria we have to determine who is better. Next, we take on the club and individual honours of these two players.

Round 2: Messi vs Ronaldo All Time Trophies

For the second round, here are the club honours and individual honours received by Messi and Ronaldo. The club honours are championship titles from the Spanish Super Cup, Champions League, UEFA Super Cup and others, as well as the FA Cup and La Liga sponsored by Bet365 Sports. You can sign up for Bet365 for the live streaming of the latest soccer tournaments.

For this round, individual honours are specific to the most prestigious ones: the FIFA Ballon d’Or and European Golden Shoe. They have, of course, won other awards and accolades that recognise their skill and passion for soccer. Messi has won the most number of Ballon d’Or awards in history (5 awards). Messi also holds the Guinness World Record for scoring the most number of goals (91) in a calendar year.

Ronaldo has three Ballon d’Or awards. He is also the only player in history to have won four European Golden Shoe awards with two different clubs. So when it comes to betting on soccer matches, choosing Ronaldo as a key player would be a great idea.

Lionel Messi won the World Cup Golden Ball in 2014 for the FIFA World Cup in recognition of his fantastic performance for his country, Argentina. Then FIFA president Sepp Blatter was asked about his view on the Messi vs Ronaldo rivalry, and he commented that Messi will “always get a lot of votes because he plays well and scores goals.” He also said Ronaldo “is like a commander on the field of play. This is the other side of football and it's good to have commanders on the field. They don’t have the same attitude and that gives life to football. One has more expenses for the hairdresser than the other but that doesn't matter. I can't say who is the best. I like both of them, but I prefer Messi.”

If you also prefer Messi, then you can check out the new online sports betting sites here on HitYah Sports so that you can wager on your favourite for any of the upcoming games.

Round 3: Abilities and Ratings

Talking about the players’ live soccer scores is typical, but when it comes down to the nitty-gritty, fans discuss about the specific abilities that Messi and Ronaldo have. Both players have shown incredible talent when it comes to playing on the field, but what about their specific soccer skills? For Round 3, we will have nine different categories of soccer skills. The results and ratings are drawn from a soccer sports website dedicated to the Messi vs Ronaldo rivalry. Are you ready?

The final tally of the scores only show how close these two players are. Messi dropped points in physicality which lead to his lower points in heading, strength and power. He does, however, have higher points in the areas of technique and his natural ability to handle the ball, as well as his effectiveness as part of a team. Ronaldo dropped points when it came to team play, but has high points for his strength and ability as a centre forward and striker. One thing’s for sure, if you want to know how to bet on soccer games and win, you can at the very least start with these two. Because when it comes to skill, there is little doubt that these two players will go down in history as two of soccer’s all-time greats.

Round 5: Income and Social Media Affluence

Both Ronaldo and Messi are known to be two of the highest paid athletes in the world, cashing in at more than US$70 million. They have major sponsors, of course. But these two also support charities, foundations and people in need.

It’s not only because of live scores that these two are so popular. When it comes to social media affluence, Ronaldo and Messi have amassed more the 50 million followers on their respective Facebook pages.

It’s undeniable that Ronaldo is an excellent member of Real Madrid and Messi an excellent member of Barcelona. But we can’t help but wonder who will outshine the other. So with all these figures and facts, is Ronaldo is better and Messi or Messi is better than Ronaldo? We surely have a few more years to watch and analyse and speculate who will ultimately earn the title of the best soccer player in the world. With soccer being the best sports to bet on today, the excitement surrounding this rivalry will only grow greater.

Ronaldo also mentioned that he hopes he and Messi can laugh about the Rivalry in the years to come, stating: “We have to look on this rivalry with a positive spirit, because it's a good thing.” And indeed, it is a good thing. This rivalry has made soccer for this generation the most exciting sport there is today.

Are you ready for the next round of soccer tournaments? Then check out the top rated sportsbooks online. HitYah features only the safest sites and the latest sports betting bonus codes.