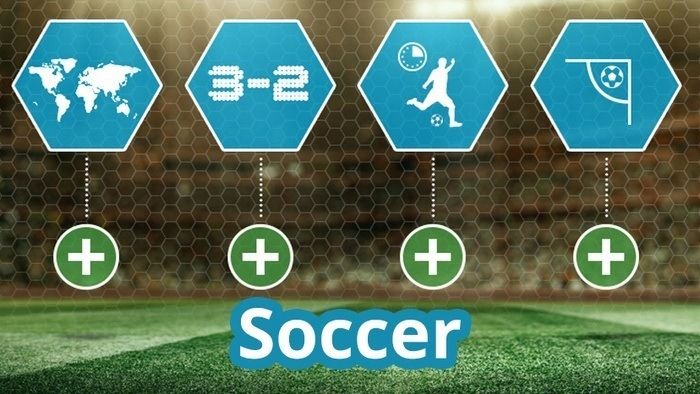 There’s something new at HitYah! We know that football (aka soccer) is one of the most celebrated sports in the world, with around 208 countries playing the game professionally. Matches are played in huge stadiums and are watched my millions online and on television. With such an enormous following comes a strong inclination to bet on football matches, and we want to make sure that you have everything you need to win your next wager.

So what’s new? We have football odds comparisons, live scores and team statistics that you can have a look at for upcoming soccer games. It’s no secret that soccer betting makes watching the games all the more exciting. With all these games happening all around the world and sportsbooks competing to offer the best odds, we decided to make it easier for you and give you the best options to increase your chances of winning.

Soccer odds are the reflection of the probability of a particular outcome or event within a game or a competition. Trusted bookmakers like Bet365 Sports and Willian Hill Sports establish the odds for each and every game. Because we here at HitYah! love to make things easier for all you punters out there, we now have up-to-date football odds comparisons to check through when you are choosing which bookie to use for a game.

Just click on the match that you want to bet on, and you will see that we have arranged for you the match odds from reputable sports bookmakers. For example, if there is a game coming up between Chelsea and Manchester City and you are rooting for Chelsea, you can pick which bookmaker offers better odds for Chelsea and place a wager there. With more than a dozen trusted online sportsbooks, you will never run out of great choices for your bets.

If you are a beginner or a newbie to the soccer betting world, you can first check out our article about the types of odds in sports betting. This way, you get a good grasp of how much you’ll earn for placing a bet. Understanding betting odds can be a bit complicated, but don’t you worry. Here at HitYah! Sports, we lead you to established bookmakers that have odds conversion capabilities. Just browse through our list of sportsbooks to discover which one is the most convenient for you.

There seems to be a soccer game or tournament going on every single day in some part of the world. Almost every country has at least one major soccer league. In terms of fan base, the most famous leagues are found in England and Spain. Some of the most popular tournaments are the La Liga, Copa Del Rey, UEFA Champions League and FIFA World Cup. We at HitYah! have put together the most recent and upcoming football events around the world. You can check out your favourite league matchups and see the odds of a football game.

For those who may not know, the bottom three teams from each division are relegated and replaced by three teams from a lower division. The first two spots are automatically given to the first and second place finishers. The third and final spot is determined by a four-team playoff. You can take a look at the odd comparisons for upcoming Premier League matches to see which teams will keep their spot at the top tier.

The top clubs in English football are Arsenal, Chelsea, Everton, Liverpool, Manchester City and Manchester United. The FA Cup is the oldest annual football competition, open to all teams in England.

Spain is home to the two best (and most expensive) clubs in the world: Real Madrid and Barcelona. The top divisions are the La Liga (officially named Liga BBVA) and Segunda Division. Copa Del Rey is an annual football cup competition for all Spanish Football teams.

The top clubs are Athletic Bilbao, Atletico Madrid, Barcelona, Real Madrid, Sevilla, Valencia. Take a look at the odds of the Spanish teams for the matches in the coming months.

When it comes to Italian football leagues, the top divisions are Serie A and Serie B. Football in Italy in the late 1980s was regarded as the most prestigious league to play in. Today, however, Italy is lagging a bit behind other European leagues. Still, there are promising players in games of Serie A, such as Paul Pogba and Rafa Benitez. The annual cup competition is called Coppa Italia.

There are two cup competitions in France: the Coupe de France and the Coupe de la Ligue. The top divisions are Ligue 1 and Ligue 2. It’s been a little unfortunate that a handful of the great players of Ligue 1 have been sold to teams outside of France, such as Newcastle United. Paris Saint-Germain (PSG) was also bought by a Qatari-based company in 2011.

Top clubs are AS Monaco, Lille, PSG, Olympique Lyonnaise, Olympique de Marseille and Stade Rennais. Let’s see what PSG has to show for as one of the remaining teams in the UEFA Champions League.

Germany won the World Cup in 2014 thanks to a well-managed domestic league that puts an emphasis on developing home grown talent. The top divisions are Bundesliga and 2.Bundesliga. The top clubs are Bayern Munich, Bayer Leverkusen, Borussia Dortmund and FC Schalke 04.

The German Bundesliga is completely entertaining and the tickets are relatively affordable too. This gives fans and punters a great opportunity for in-play betting, which is great for soccer because any goals scored early in the game will increase football in-play odds.