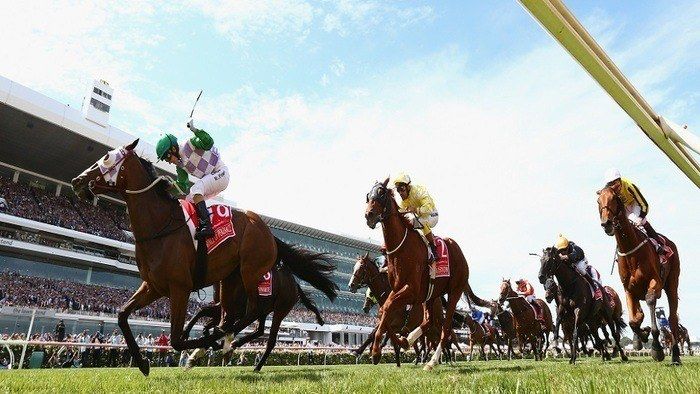 Ultimate Guide to the Melbourne Cup 2016

The 2016 Melbourne Cup is affectionately known as ‘the race that stops a nation’. With more than 90% of the population watching it, this horse race competition is undeniably the most loved and notable event of its kind in Australia. The event is held each year on the first Tuesday in November at Flemington Racecourse in Melbourne. This year that first Tuesday is on 1 November, with the race starting as usual at approximately 3 PM AEDT. We know how much you want to get an idea of who will win Melbourne Cup 2016 so you can start to prepare your online horse racing betting plan. But before you search for bookmaker bonus promotions, let us give you a little background regarding the event before we divulge our predictions.

It’s Not Just About Who Will Win Melbourne Cup 2016

This year’s Melbourne Cup marks the 156th edition of the event. It is not only Australia’s most loved horse race, but it is also considered the richest handicap in the world. Sponsored by the Emirates Airline, the prize money for the main event is worth approximately AU$6.2 million. While there are other notable sports events to place your bets on, the 2016 Melbourne Cup is surely one to watch out for. Needless to say, horse racing fans have been forming their own Melbourne Cup betting predictions even months before the event.

Everyone can keep themselves busy as the event features plenty of additional races with varying prize values and distances. By far, the longest is the 3200 metre Emirates Melbourne Cup, but the entire event is a spectacle that is sure to enthral the audience, not only in Australia but also around the world.

Every year, around 100,000 people prepare their bets and put on their best clothes to attend the race in person at Flemington. Women wear their most outrageous hats and colourful dresses, and a couple of special marquees are put up to accommodate VIP guests. The event not only showcases the best racehorses and jockeys from around the world but it is also a fashion spectacle full of fun and eye-catching fashionista entertainment.

Individuals can join in all the excitement of the Melbourne Cup Carnival by purchasing a general admission ticket. This way they can experience the action first hand, dine in a wide variety of food outlets and bars and try their luck by joining the betting ring. Alternatively, viewers at home or in bars and restaurants outside the Melbourne Cup Carnival can visit one of HitYah’s sites to place horse race sports bets online.

Clearly, the event is not all about the horse race and who will win Melbourne Cup 2016. It’s quite amazing to think that the entire country comes to a standstill to watch the event. The occasion is so big that the day has been recognised as a public holiday in some parts of Victoria since 1873. On the other hand, for the individuals at Flemington Racecourse, it will be a day of great racing, spectacular fashion shows, music, entertainment and dining.

But Really, Who Will Win Melbourne Cup 2016?

If you are a fan of live sports betting or horse racing in particular, you'll understand that several factors determine who will win Melbourne Cup 2016. While a jockey’s racing skills contribute to the performance of a racehorse, the animal itself plays a significant role in the competition. An average thoroughbred racehorse weighs 1,000 lbs, stands at 16hh and has a big heart weighing around 101 lbs. A good racehorse should feature a long, smooth stride, as well as keen and alert eyes along with ears that point forward. Another factor that comes into play is the expertise of the horse trainer.

Altogether, your best bet in determining who will win Melbourne Cup 2016 is to look at the winners from the previous year and the overall best performers. So before you go to William Hill Sports, take a look at the list below so you can gain an overview of the odds for horse racing betting.

Now let’s take a look at the top contenders for who will win the 2016 Melbourne Cup. With remarkable career stats and earnings, these horses are predicted to perform well on the upcoming event. It will help if you review our lists when you view your horse racing betting odds online at Ladbrokes Sports.

Australian Horses in the 2016 Melbourne Cup

We’re looking at the promising performance of Galileo’s son, Sertorius. Trained by Jamie Edwards, this galloper has been seen to get out of his comfort zone and step up his game. He has placed third behind Offer and Opinion at the 3200m event in the 2014 Sydney Cup. Another Australian horse that we’re rooting for is Kiwi galloper Mongolian Khan. Conditioned by veteran trainer Murray Baker, this talented Kiwi horse has performed well in a number of races in his career, including the ATC Derby (2400m) and the G1 Caufield Stakes. Would this be the year that an Australian galloper wins the Melbourne Cup? Visit one of HitYah’s live sportsbooks and our newest online sports books on 1 November to get real time results.

Who are the Top Australian Jockeys

While you’re looking at live odd comparisons and searching for sports betting bonuses, review our featured top Australian jockeys so you can develop a horse race betting plan that is profitable.

One of the top performing Australian jockeys in the Melbourne Cup is Damien Oliver. In 1995, he won his first cup when he raced with Doriemus. He is best remembered for winning the 2002 Melbourne Cup with Media Puzzle, days after his brother Jason’s fatal horse fall. His tale was so compelling and touching that a feature-length film was released based on him.

Another Australian jockey to watch out for is 2000 Melbourne Cup winner Kerrin McEvoy. Winning 7 Group 1s, McEvoy has become the favoured jockey of world-renowned Godolphin stables. His Melbourne Cup record is 12:1-1-1.

Brett Prebble is another Australian jockey that we’re expecting to perform well on the 2016 Melbourne Cup. He is most notable for winning the 2012 Melbourne Cup aboard Green Moon. Prebble started as an apprentice in Melbourne, and he moved to Hong Kong to create a name for himself in the competitive field of horseracing. It was there where he quickly became one of the top jockeys in the world. Prebble has won the 2005 The Age Classic and the 2012 Queen’s Silver Jubilee.

There is always so much information to take in when planning just who to bet on in the Melbourne Cup. We hope that with this brief guide, you at least now have a start for this, and some idea of who to look out for when you visit the best sport betting websites on the 2016 Melbourne Cup!

History of the Melbourne Cup

Any talk about Cup Day in Melbourne, invariably includes gleeful and cheeky comments on the extravagant fascinators, canapés, sparkling champagne, suits and ties. It is funny how sometimes the race-track fashion overshadows the main highlight of the day - which is horse racing. Even American writer Mark Twain was fascinated by the event when he attended it in 1895. He shared: “Nowhere in the world have I encountered a festival of people that has such a magnificent appeal to the whole nation. The Cup astonishes me.”

The Melbourne Cup is also one of the most challenging horse races in the world. Horses must run over 3200 metres in a handicapped race, meaning better horses are required to carry a heavier weight. Needless to say, it would be difficult to pick winners for the 2016 Melbourne Cup. Luckily for you, you can go to William Hill Sports or Ladbrokes Sports to check the odds of competing horses. Simply browse through HitYah’s sports betting sites to check out the best sites to place your horse race bets on!