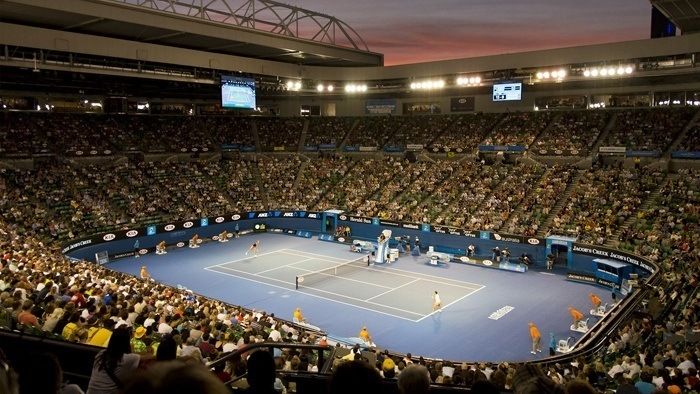 The heat is on! Melbourne is once again alive with the powerful thud and thunder of world championship tennis. From 18 to 31 January many would argue that there’s no better place to be than the hallowed ground of the Rod Laver, Hisense and Margaret Court arenas. Tennis stars from around the world will all be under titanic pressure and microscopic attention. Already media stories are relating the court couture of this year’s games — from leopard skin undies to Serena’s tireless fashion style. But, most importantly, everyone's eyes will be on who stays in and for how long, how they've played, and — ultimately — who will take out the main prize.

What is the Australian Open Held?

Managed  by Tennis Australia, the Australian Open is THE Grand Slam event of the Asia Pacific region. It is the first Grand Slam event in a list of four, which includes the French Open, Wimbledon and the US Open.

The event attracts high attendance, second only to the US Open. 2015 attendance reached the highest ever at 703,899.

When is the Australian Open?

This major tennis tournament is held every year in the last half, or final fortnight, of January. It is the first tennis Grand Slam event of the year.

The event was first held way back at the turn of the twentieth century, in 1905. With the tyranny of distance and the virtually impossible logistics of travel in those times, it took a little while for international tennis stars to flock to the tournament as they do today.

Now hundreds of athletes from around 50 nations compete across all the events, watched and followed by millions of people all over the world.

Where is the Australian Open Held?

The cosmopolitan capital of Australia’s south-eastern state of Victoria, Melbourne hosts this event each year. Melbourne Park, located right in the sports and entertainment precinct of Melbourne, has played host the event since 1988. As well as tennis, the venue plays host to a broad range of major sporting events including soccer, rugby, athletics, cycling and ice skating. And it is a popular place for rock concerts and family shows as well.

The tournament was the first of the Grand Slams to feature indoor playing in wet weather or high heat. All of the tournament’s courts have retractable roofs. Three major courts at Melbourne Park are utilised for the event.

The main stadium and centre court at the Australian Open is Rod Laver Arena. It was named in 2000 for Australian tennis great Rod Laver, the only player in the history of tennis to have captured two Grand Slams (1962 and 1969) — the ultimate honour achieved by winning the Australian Open, French Open, Wimbledon and US Open singles titles in the one calendar year. Rod Laver is widely regarded as one of the greatest in world tennis history. Among his many accolades, he was the No 1 ranked professional from 1964 to 1970 and he is the holder of the most singles titles ever won in tennis.

Rod Laver Arena has seating for 15,000 spectators. A multi-use venue, the stadium is able to host a wide range of sporting and entertainment events, from Grand Slam tennis matches like the open, as well as motorbike super-cross, rock concerts, conferences and classical ballet.

A wide range of sporting and entertainment events are held each year at this multi-purpose arena. This arena was renamed in tribute to Australia’s most successful tennis player, Margaret Court, a retired world No 1 professional tennis player. Margaret Court also gained more major tennis titles than any other player ever, including every possible Grand Slam title (singles, doubles and mixed doubles) at all four of the Grand Slam events.

Hisense Arena was built in 2000 to extend the park’s capacity specifically for the Australian Open tennis tournament. A modern sports arena, it was also built to function as an entertainment venue. This huge arena possesses a larger floor area than Rod Laver Arena, and corporate suites and function rooms. It is also the host venue for the Melbourne Comedy Festival Gala.

Who’s Playing in the Tournament?

The top of international tennis talent comes to Australia each year to do battle.

The Australian Open continues to attract the cream of the international tennis world: Federer, the Williams sisters, Djokovic, Sharapova and Stosur, just to name a few. Add into the mix Australian Nick Kyrgios, and his awe-inspiring entrance into the tournament with his great first match on 18 January. This sometimes polarising player showed us all what he’s made of, launching into a great start for 2016. A passionate player, Kyrgios is also proving is professionalism, keeping is cool in the heat of the game and the high temperatures. And it’s here that Lleyton Hewitt, one of the enduring heroes of Australian tennis, will bid his final farewell to the game. With his indomitable talent scoring straight sets wins to his credit, Hewitt once again wowed audiences — which included in the stands John Newcombe, John Fitzgerald, Par Rafter and Wally Masur.

Australians and tennis fans all around the world follow the televised live coverage of the event.

Who are the Australian Open Sponsors?

Sponsors and official partners for the 2016 Australian Open include an array of world renowned companies and corporations, including a swag of locally grown businesses.

The major sponsor for the event is Kia Motors. Sponsors for the Australian Open since 2002, Kia Motors continues to support the players and promote the growth of the game in Australia. Each year this sponsor supplies over 100 new Kia vehicles to Tennis Australia for the world’s top players, officials and VIPs. Tennis superstar Rafael Nadal is a global brand ambassador for Kia Motors.

Associate sponsors include the ANZ Bank since 2010. ANZ are the official bank of the Australian Open. They also sponsor Tennis Australia’s children’s starter program, ANZ Tennis Hot Shots, thus supporting their investment into Australian tennis from the grassroots up. The Hot Shots program has seen over 500,000 primary school aged children in the program in the past year alone.

Another associate sponsor is Jacobs Creek. This proud Australian brand has enlisted tennis world number 1 Novak Djokovic as the new face of their annual push which in past years has also featured Andre Agassi.

There are a host of official partners for the event, including many who have supported the game and Australian tennis year after year.

The tournament’s IT sponsor is IBM. Their SlamTracker brings you scores, stats and match analysis. Aces, serve speed and other stats help provide real-time details of matches in progress.

How to Place a Bet on the Australian Open

Australians love sports and Australians love having a punt, especially on national and world-stopping events. As a recreational pastime, it’s one of the most popular in the land. If you’re watching the matches from the comfort of your own home, you can place your bets via a range of online betting sites. These sites have a variety of betting options available.

William Hill: The Official Gambling Partner of the 2016 Tournament

Willliam Hill is the first official gambling sponsor of any Grand Slam event, attesting to the growth of sports betting world wide. The company has a long tradition of sports betting and working with international sporting bodies. William Hill are at the innovation forefront of Australian wagering, especially with their In-Play live streaming of the Australian Open. The company has a range of tennis betting markets available throughout the tournament, including head-to-head to handicaps and total games. One of the few global betting companies that own their own technology, William Hill are well placed as the gambling partner for this major sporting event.

Australian Open has in the past been seen as the poor cousin to the other three tournaments of the Grand Slam event. But all that’s changing. The purse for 2016 has set a new record at A$44 million, and high hopes are already being set for 2017.

All players at the event are recognised for their contribution to the tournament, with each of them receiving a $2500 travel voucher, free accommodation, racquet stringing and all on-site meals.