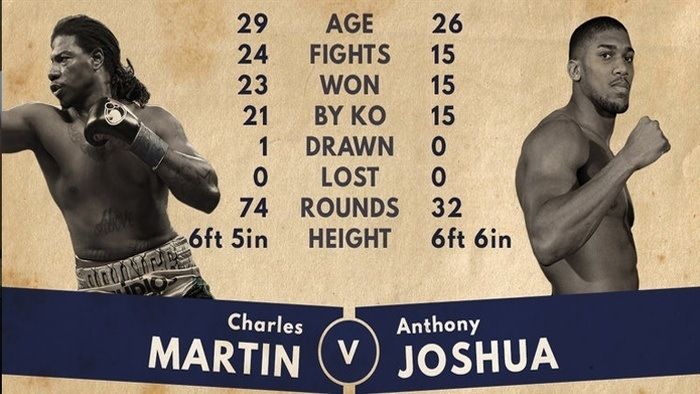 Anthony Joshua claimed the IBF heavyweight title from Charles Martin after two rounds of fight at O2 Arena in London last 9 April 2016. In a bout sponsored by William Hill Sports, Joshua was able to floor his American opponent with a right-hand counter.

Just by looking at boxing betting odds, you will see that Martin actually holds a slight advantage against Joshua. Martin has had 22 wins, 20 of which were won via knockouts. In contrast, this bout was just Joshua’s 16th professional fight.

Despite lacking the same experience as Martin’s, 26-year-old Joshua was able to bag Britain’s sixth world heavyweight title. Punters who placed boxing bets on William Hill Sports were definitely winners too in this fight! Joshua is also the first British heavyweight boxer to win both an Olympic gold medal and a world title under a major professional sanctioning body.

This bout was Martin’s first defence of the title after winning last January. Feeling like a boxing royalty, Martin entered the ring wearing a crown, a velvet cape with fur trimmings and a smile as big as his shoulders. But this smile soon faded.

The bout started slow, but after the half of the first round, Joshua was able to find his range and was able to land three or four strong right punches which rattled Martin.

Early in the second round, Joshua threw in a left hook which staggered Martin. A perfectly timed right punch from the former floored the American champion.

Referee Jean-Pierre van Imschoot counted Martin, and he rose after eight. However, after a massive right from Joshua, he was down again and the fight ended one minute and 32 seconds into the round.

This bout sets Joshua’s career at 16 knockouts out of 16 professional fights. Known to cut fights short, the new British champ only went past three rounds in his fight against Dillian Whyte.

Now the question that everyone has been asking is, “What’s next for Anthony Joshua?” Will he join the ranks of the highest paid athletes in the world? We’ll have to wait and see. But for now, the immediate response to this win came from world heavyweight champion Tyson Fury.

Preparing for his rematch against Wladimir Klitschko, Fury called out Joshua, vowing to “slay” him given the opportunity to meet him inside the ring. Known to be an outspoken champion, Fury took to Twitter and promised to inflict Joshua with his first defeat in his professional career.

He tweeted, “So AJ gets a belt, looked slow ponderous, & still looked like a bodybuilder, let me slay the lamb (sic)”

Fury claimed to have gone to the best boxing betting sites and placed wagers worth around £1,000 on Martin.

If that fight pushes through, be sure to check boxing betting odds at William Hill Sports!