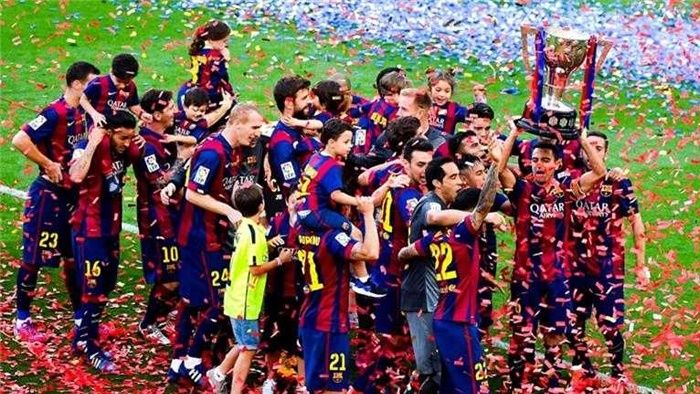 Barcelona claimed their 24th La Liga title with a win on Saturday afternoon, defeating Granada 3-0. Luis Suarez opened the scoring in the 22nd minute for Barcelona and added a second in the 38th minute. The Uruguayan finished off his hat-trick in the 86th minute to seal the title for the Catalan side.

Suarez’s three goals gave him 40 in La Liga this term and Pichichi, the Spanish golden boot, as the league’s top scorer. With the match finished off in the first half, Barcelona took their foot off the accelerator in the second period, cruising to the title.

The man behind the champions

Enrique’s time at the latter only lasted a season, and the coach had to endure the egos of legendary Roma stars Francesco Totti and Daniele De Rossi. A win success rate of 40% at Roma saw Enrique leave 12 months after he took the job.

Enrique has reinvented himself as manager of Barcelona winning six trophies in his two seasons with the club. He still has a chance at a seventh win when Barcelona play Sevilla in the Copa Del Rey final on May 22nd. As expected, sportsbooks such as Bet365 are showing a very high likelihood of this.

Suarez: the next Ballon d’Or winner

Forty goals in 35 games in La Liga saw Suarez not only win the Pichichi, but he became the most important player on Barcelona’s side, even more than Messi down the stretch. It marks the first time since Diego Forlan won the award in 2009 that a player outside of Messi or Cristiano Ronaldo has topped the goal scoring charts.

Add in 16 assists and Suarez has had a hand in 56 of Barcelona’s 109 goals this season. Suarez nearly doubled the goal production of teammates Lionel Messi and Neymar who tallied 26 and 24 goals, respectively. Combined, the three attackers attributed to 90 of Barcelona’s goals and contributed 44 assists. An unbelievable stat, but one that does show how vital the three are to Enrique’s side.

Back in October and November as Lionel Messi sat on the sidelines with injury, both Suarez and Neymar kept Barcelona moving along. While that wasn’t as amazing as Suarez’s last five matches, he did score 12 times as Messi regained fitness. It was during that time that Suarez’s influence on the team became greater than it had been.

Real Madrid and Atletico Madrid have both had strong finishes to the season. Add in the fact that both are playing in the Champions League final, and it shows the strength of both teams. Barcelona will need to be aware of both Madrid teams, next season.

Zinedin Zidane will have a full reign over the team starting in pre-season. The way he has managed the side compared to Rafael Benitez is night and day, and his side provide more of the free scoring Madrid fans want to see.

For now Barcelona will revel in the moment, beating out their eternal rivals on the last day of the season. One more trophy is now up for grabs as Suarez leads the Catalan side against Sevilla in the Copa Del Rey final.