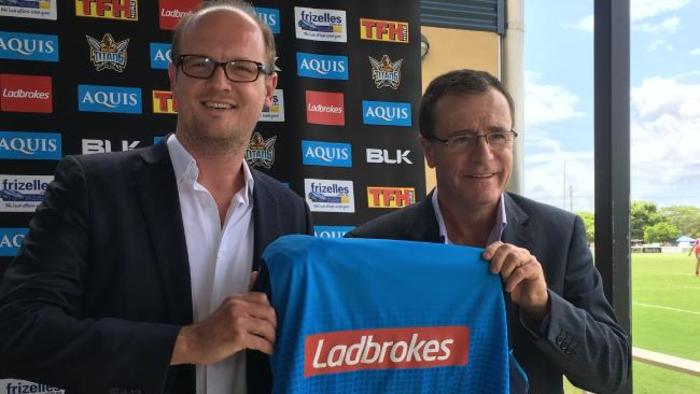 The Australian division of UK bookmakers Ladbrokes and the Gold Coast Titans have announced their official key partnership for the 2016 National Rugby League season.

Last Wednesday Ladbrokes Australia pronounced it had signed on as a sponsor of the team. As a result, the logo of the premier sports betting bookmaker Ladbrokes would appear on the lower back and sleeves of the Titans’ official jerseys. The sponsorship deal officially took effect last Sunday at the Titans’ kick off game at the Telstra Premiership season 2016 against the Newcastle Knights.

“The partnership with the Gold Coast Titans for the 2016 NRL season is a milestone event for Ladbrokes Australia as it’s our first major NRL sponsorship since entering the Australian market in 2013,” said Simon Jarvis, chief marketing officer of Ladbrokes Australia. “As a proud QLD based company we couldn’t have found a match with a better partner that so closely aligns with our industry affiliations.”

Jarvis adds, “The Gold Coast region is key to our business, its growth and development and our brand association is going to be very beneficial for everyone involved. We’re working on some great ideas to take sporting partnerships to a new, innovative and engaging level during the course of the season – for viewers at home and supporters in the grand stand.”

Titans CEO Graham Annesley expressed his excitement about the partnership with Ladbrokes Australia. He said that he believed both parties of the partnership will continue to firmly embed themselves into the Australian sporting landscape.

“Our partnership with Ladbrokes is incredibly important for the future success of the Titans, both on and off the field. The Ladbrokes brand internationally is older than the game of Rugby League itself with over 130 years of history behind it. We are very excited to be joining forces with such a major, well-established multi-national brand that shares the Titans vision for future growth and success.”

In addition, Annesley said: “Sponsorship is incredibly important to our club to ensure we can provide as many resources as possible to Neil Henry and the players, giving them the best possible chances of success.”

Both parties are also completely committed to promoting responsible rugby league sports betting, and ensuring that the integrity of rugby and other sports are protected at all times.

Aside from the new sponsorship deal, Ladbrokes Australia also recently launched the new Odds Boost feature, which is available across all desktop and mobile platforms. This Odds Boost feature allows customers of Ladbrokes Sports to enhance the price of any horse or greyhound market at a touch of a button. The Odds Boost also allows users to bet up to AU$1,000 on a boosted racing market. The option is refreshed daily at midnight.

Dean Shannon, CEO of Ladbrokes Australia, said that this new feature would further differentiate Ladbrokes from other Aussie sports betting operators because it allows punters themselves some control over the racing market. This is in line with the company’s “Bet Better” philosophy. Kris Robinson, Ladbrokes Australia’s head of product, added that the Odds Boost feature would eventually be expanded to other sports and novelty betting markets. To check out this feature, sign up at the Ladbrokes Sports site.