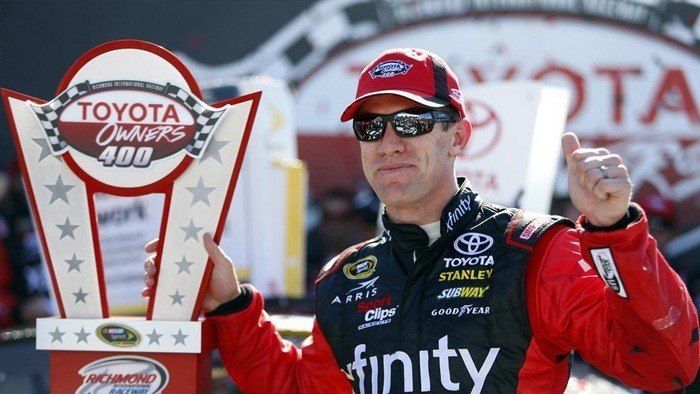 NASCAR star Carl Edwards is going for a third straight win at the upcoming GEICO 500 at Talladega Superspeedway on April 29 to May 1, 2016. Edwards won the last two NASCAR Sprint Cup Series races, and he has led the most laps in the past three contests. So ready your sports betting bonuses, because we will find out if Edwards will take a checkered flag from Talladega where he has never won before.

Edwards has long advocated the implementation of a lower downforce at NASCAR races. Lowering the downforce makes race cars more challenging to control. This will give more emphasis on a driver’s skill, over the race car’s expert engineering. This makes it more exciting to bet on sports live.

It was only this year that NASCAR granted the implementation of a lower downforce aerodynamics package for race cars. As expected, the 36-year-old Missourian excelled under the new aerodynamics package, and was a favourite at top online sportsbooks.

A Challenging Race Ahead at Talladega

Edwards is truly having a great run, but he has to face the challenge of Talladega. The No. 19 Joe Gibbs Racing Toyota driver has struggled at this track throughout his career. In 23 starts at the oval, he has made three top-five and six top-ten finishes, but never a first place win. His best performance on the track thus far was a third place finish back in 2013.

Built in 1969, the Talladega Superspeedway is 2.66 miles long, and features 18 degrees on the Tri-Oval and 33 degrees of banking on the turns.

Edwards said, “Headed to Talladega to try to better our average finish there. We don’t have a win there, but the way our team has been running, I feel like I am on one of the best runs of my career. I’m having a real great time with my crew and these Joe Gibbs Racing Toyotas are fast.”

The Talladega Superspeedway is a track wherein cars need to have restrictor plates installed. Restrictor plates limit the amount of fuel and air that enters the combustion chamber, limiting the engine’s horsepower. This creates a different scenario for sports betting odds. The plates limit the top speed of cars, and also increase the importance of aerodynamics. Because of these, two race cars running together with restrictor plates become much faster than a single race car on its own. Race cars on a restrictor plate race tend to run together like a pack, only a few inches apart.

In order to win GEICO 500, Edwards said that he would draw a strategy based on his experience at the Daytona 500. Daytona 500 – the biggest Sprint Cup race of the year – is also a restrictor plate race. When Edwards drove at the Daytona International Speedway, he finished in sixth place after sustaining heavy damage to his car.

“We ran well as a group in Daytona and we really worked great as a team together,” Edwards said. “Hopefully we can do that again and have similar results.”

Get into the GEICO 500 Action!

Are you excited for the GEICO 500? Then keep up with the action on April 29 – May 1 and bet on your favourites through top sports betting sites like Sports Bet.

Edwards remains to be a great candidate for the win. He currently tops the NASCAR Sprint Cup Series standings with two wins under his belt, as well as five top-five and eight top-ten finishes. The No. 19 Joe Gibbs Racing Toyota driver set records for green flag passes for the lead three times in the first nine races, and has only finished lower than seventh once. So place you bet for GEICO 500 and visit Sports Bet online today.